MIDLAND, Tex. — On the 15th floor of an office tower in Midland looms a five-foot-long trophy black bear, shot by the son of an executive at Caza Oil & Gas.

But it is Caza that has recently fallen prey to a different kind of predator stalking the Texas patch: too much debt.

While crude prices have over the last 20 months, a reckoning in the nation’s vast oil industry has only just begun. Until recently, companies were able to ride out the slump using hedges to sell their oil for higher than the low market prices.

In recent months, however, most of those hedges expired, leaving a number of oil companies low on cash and unable to pay their debt. More broadly, energy executives and their lenders are realizing that a recovery in oil prices is at least a year away, too long for many companies to hold out. 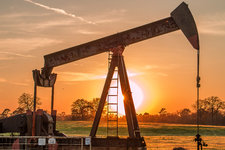 Energy executives and their bankers are bracing for a prolonged downturn that could remake the energy industry in a way not seen since the turmoil of the late 1990s gave rise to mega-mergers like Exxon Mobil.

If prices hold at such low levels — oil traded near $28 on Tuesday — as many as 150 oil and gas companies could file for bankruptcy, according to IHS, an energy research firm.

While that represents a relatively small slice of the overall industry, there are hundreds of other companies that had piled on debt to grow from tiny start-ups into significant players in the nation’s shale oil boom. Now they are likely to be acquired or their assets sold off. As much as a third of the oil industry could be consolidated as a result of the downturn, according to one estimate.

“Today our goal is to survive,” Danny Campbell, chairman of the Permian Basin Petroleum Association, began his welcoming remarks at a dinner here for oil executives last month. “Keep your name in the phone book and your debt low.”

There are now virtually no wells in the United States profitable to drill. That has forced some companies into a fatal spiral, producing oil simply to satiate their lenders. Others are getting desperate. In late December, Caza essentially sold itself to a New York investment firm to pay off its lenders.

Investors are on edge. A report that Chesapeake Energy, a major natural gas and oil company, hired lawyers to help restructure its more than $10 billion in debt sent its shares plunging on Monday, prompting the company to that it was preparing for bankruptcy.

The oil industry regularly undergoes booms and busts. But the downside of this cycle may prove more extreme, and the shakeout messier, thanks to the easy money that flooded the industry from hedge funds, firms and tax-advantaged investment structures called business development companies.

Paul Lucas of Adventure Exploration in his office, showing a chart of volatility in oil prices in recent years.

Energy & Exploration Partners of Fort Worth, for example, borrowed from at least 24 hedge funds to help acquire thousands of acres of land in Texas as oil prices topped $100 a barrel. The company filed for bankruptcy in December, after its lenders could not agree on how to save it.

As the losses mount, investors and lenders are already laying the groundwork for the rebound, snapping up assets in fire sales and making new loans. But these are uneasy days, even for opportunists. Burned by forecasts that predicted oil would recover last year, many investors fear that they could be too early if they jump in now.

The industry’s crushing debt load — energy companies on average have twice as much leverage, or borrowed money, as companies in the Standard & Poor’s 500-stock index — is also having some perverse effects.

Some oil companies are keeping up production simply to generate enough cash to make debt payments, according to bankers and energy executives.

Banks looking to shore up collateral on their loans — which is typically a company’s oil reserves — are requiring producers to drill new wells to prove that their reserves can actually produce the oil.

Major oil companies and , which have ample cash cushions, may end up benefiting from the turmoil, scooping up broken companies or their assets.

But even the global giants are not immune to the slump, as their profits dwindle and credit rating firms downgrade their debt. On Tuesday, Anadarko slashed its quarterly dividend more than 81 percent to conserve cash. And Exxon announced last week that it was curtailing its stock buyback program.

The worst pain is hitting the smaller players: thousands of companies that snapped up land in places like West Texas , using billions in borrowed money.

Many of these companies operated like start-ups with little control over expenses and without a proven track record to help them survive a slump. None of that seemed to worry Wall Street, which showered the companies with debt.

In the summer of 2014, Energy & Exploration Partners borrowed more than $700 million to acquire thousands of acres in East Texas.

The land was rich in oil, but it cost more to produce because of the rudimentary infrastructure in the remote area. For a time, Energy & Exploration Partners had to pay for diesel generators to power the rigs because there was limited electricity sources, according to a person briefed on the matter who spoke on the condition of anonymity.

When oil prices topped $100 a barrel, the company could easily cover its production costs and interest payments. But all that changed when, at Saudi Arabia’s urging, the Organization of the Petroleum Exporting Countries resisted calls to cut production in late 2014, leading to a worldwide glut and sending prices into a free fall.

Energy & Exploration Partners bought hedges, allowing the company to survive for most of last year by selling oil at $70 a barrel.

But when those hedges ran out late last year, the company was low on cash. It declared bankruptcy in December.

Nationally, just 15 percent of oil and gas production is hedged in 2016, compared with 28 percent of production in the fourth quarter, according to IHS, the research firm.

Without the cushioning from hedges, oil prices soon will no longer cover the costs of production.

In Midland, the heart of the oil-rich Permian Basin, as many as 40 decommissioned drilling rigs have been stacked along Interstate 20 since the fall, a bitter reminder for many that exploration in the fields is grinding to a halt.

As rigs go off-line, companies are using technologies to squeeze as much oil as they can out of existing wells. But if an aging well breaks, many companies are not spending the money to fix it, and executives predict a rapid decline in production as shale wells peter out.

Now sensing a possible bottom, a new wave of Wall Street money is flooding the oil patch, trying to catch a recovery.

Adventure Exploration Partners sold all of its West Texas oil fields for $210 million just as prices were collapsing in late 2014. A few months later, with oil already below $50 a barrel, Paul L. Lucas, the company’s chief executive, and his partners began to dip back in again. With $50 million committed by Kayne Anderson Capital Advisors of Los Angeles, the company started acquiring new acreage.

Adventure Exploration Partners is not drilling yet, because the price is not right. “We’re hoping to see prices stabilize and recover sometime in 2017,” Mr. Lucas said.

For David M. Zusman, chief investment officer at Talara Capital in New York, oil has reached an “inflection point” that he is not going to miss.

His investment firm, which manages about $500 million for endowments and pensions, bought up Caza Oil & Gas, a distressed oil producer in the Permian Basin, in December.

Caza was paying double-digit interest rates to a business development company managed by Apollo, according to people briefed on the matter. The oil company needed a way out. Just before Christmas, the company sold equity to Talara. The deal gave Talara control of the oil company, while severely diluting the holdings of Caza’s existing shareholders.

Flush with new equity, Caza was able pay off the debt to the Apollo-managed fund, as well as other debt to Yorkville Advisors, a hedge fund in Mountainside, N.J.

Freed from costly interest payments, Caza now has the flexibility to hold on to its prized shale holdings on the border of Texas and New Mexico.

Sitting recently in a Midtown Manhattan conference room adorned with color-coded maps of the Permian Basin, Mr. Zusman was sure about the coming shakeout in the oil patch.

“The haves and the have-nots are becoming clear,” he said.