At the Birthplace of a Graft Scandal, Brazil’s Crisis Is on Full Display

BRASÍLIA — The mercantile thrum at the Posto da Torre begins at daybreak with a rush of motorcycle deliverymen and taxi drivers who come to fill their tanks with gas, and their bellies with warm puffs of cheesy bread.

Posto da Torre, a gritty pit stop in the heart of ’s antiseptic capital, is indistinguishable from the countless other 24-hour gas stations that fleck the nation’s cities and highways.

But hidden behind the gas station’s row of storefronts was an illegal money transfer business run by its owner, Carlos Habib Chater, and an associate, Alberto Yousseff, officials discovered during a 2013 drug investigation that led the federal police to the operation.

In the months that followed, Mr. Yousseff, encouraged by the promise of a plea deal, told prosecutors about his role as the moneyman who helped funnel billions of dollars skimmed from Brazil’s state oil company, and payoffs from construction companies, to some of the country’s most powerful politicians.

The scandal, known as , or Operation Car Wash, has led to the arrest of more than 150 business tycoons and elected officials, plunging the Brazilian elite into a crisis that continues to unfold. (Lava Jato is a bit of a misnomer; the closest thing Posto da Torre has to a carwash is a laundromat.)

In the coming weeks, Brazil’s Senate on charges that she manipulated the to help her re-election campaign in 2014. Although her alleged crimes are not directly tied to Lava Jato, her downfall has been fueled by public anger over the scandal’s revelations of epic and systemic corruption.

Here at Posto da Torre, named for a nearby television tower that provides visitors with panoramic views of the capital, most customers seem unaware of the gas station’s notorious past. Few, though, have escaped the deprivations of an economic recession that has left 11 million Brazilians unemployed and millions of others struggling to survive.

Soaring gas prices, high taxes and rising inflation have pushed many working-class Brazilians to the brink of poverty. Petty corruption and an onerous bureaucracy frustrate the aspirations of young entrepreneurs.

The birthplace of a national scandal, Posto da Torre is also a stage where the cruelties of Brazil’s economic crisis and political paralysis are on full display.

Consider Tânia Araújo Ribeiro, 32, who serves sugar cane juice and manioc flour crepes at the gas station’s snack bar. Until last year, Ms. Ribeiro and her husband, Gleiciano, 32, were newly inducted members of the Brazilian middle class. They bought their first car, took frequent vacations and did not think twice about dining out. 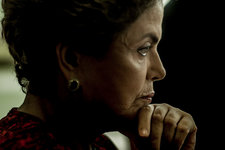 Graphic | Brazil Impeachment: The Process for Removing the President Dilma Rousseff, Brazil’s president, is facing removal from office. Here is a step-by-step explanation of the proceedings.

All that changed after Mr. Ribeiro lost his construction job. Now the couple hesitate before buying meat, and they have postponed plans to have a second child. “I’m very afraid,” Ms. Ribeiro said one recent morning. “I can’t have other children if I can’t provide for them.”

Like most of the police officers, landscapers and street cleaners who help maintain the modernist capital, a utopian-inspired creation of the architect Oscar Niemeyer, the Ribeiros live in a satellite city a 40-minute bus ride away. Unplanned and plagued by poor infrastructure and rampant crime, the cities are home to more than two million migrants who flocked to the region in the 1960s and 1970s seeking jobs but could not afford the capital’s daunting housing prices.

Under Ms. Rousseff and her predecessor, Luiz Inácio Lula da Silva, the Brazilian economy roared, buoyed by global demand for commodities like soybeans and iron ore that vaulted millions of the working poor into the ranks of the middle class. Slowing growth in China helped bring the good times to an abrupt end, but critics say Ms. Rousseff’s flawed economic policies compounded the misery.

The past two years of recession and scandal have left Brazilians like Ms. Ribeiro angry and embittered. “We pay so many taxes and practically all of it gets thrown to the garbage,” she said. “We get nothing, and everything goes into their pockets.”

Outside the gas station, Fábio Rodrigues Lima, 32, was filling up the tank of his motorcycle.

Told about Posto da Torre’s ignominious role in the scandal, he reacted with indignation and then fumed about the everyday corruption that complicates life in Brazil. A migrant from the coastal state of Bahia, he used to work at an upscale restaurant here but quit after the owners refused to give him his share of the 10 percent service fee they charged diners. With a 7-year-old son to support, he makes deliveries for a drugstore chain using a motorcycle he borrowed from his mother.

“What I can’t bear, and what everyone else can’t bear, is all this corruption,” he said. “When I see politicians, I feel disgusted.”

Posto da Torre’s employees have been instructed not to speak to the media about the scandal, but several welcomed the opportunity to unload. Claudenice Cristiana Rodrigues, 37, an attendant at the gas station’s laundromat, is raising four daughters on the $700 she earns each month. “Among all the laundries, this one offers the best salary,” she said.

Still, rising prices have forced her to cut back on nonessentials like cable television and the home internet that gave her daughters a leg up on school assignments. Having never completed high school, she dreams of continuing her education, and perhaps one day buying a motorcycle.

But despite the hardships, Ms. Rodrigues is rarity among Brazilians: She is among the 11 percent who still support Ms. Rousseff, the embattled president. “Dilma made many mistakes, but I didn’t want to see her suspended,” she said.

Ms. Rodrigues is a migrant from Maranhão, an impoverished state in Brazil’s northeast. She and her family were beneficiaries of past government programs that distributed free land, part of an effort to encourage people to move to what was then a forbidding expanse of savanna. She turns wistful recalling the first night they camped out on their land, sleeping under the stars. “It was only us and the sky,” she said.

In the right hands, government can be a force for good, she said, noting the many relatives who received housing and other benefits during the administrations of Mr. da Silva and Ms. Rousseff, both of them from the country’s left-leaning Workers’ Party. “If there was an election tomorrow I’d vote for Lula,” she said, referring to Mr. da Silva.

Ms. Ribeiro, the snack bar employee, was not as sanguine. As far as she is concerned, Brazilian politicians are primarily interested in lining their own pockets.

“We could have more equality if the politicians wanted,” she said. “I hope things get better, but I don’t have much hope. Even when good people get to power, the money corrodes them and they end up forgetting the Brazilian people.”