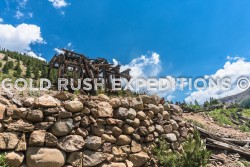 The Independence Mine Claim covers multiple mines and prospects on 40-acre Lode Mining Claim. Colorado Mine IDs are CMC289886 and CMC289887. The claim is located along CO Highway 82, also known as Independence Pass Road. The road is closed from October to May of each year.

The mines are an example of Colorado’s forgotten or hidden natural resources. Gold and Silver in substantial quantities have been reported as late as 1981. These values would be relatively simple to develop and extract due to the already in place infrastructure of a state Highway.

The Independence Mines produced very rich gold ore. Vanderwilt (1947) quotes “stopes yielding 2.3 ounces per ton of gold in 1932”, but due to lack of development and workforce, production had diminished to 2 tons in 1940.

Dunn (2003) indicates that most of Pitkin County's gold production probably came from this Independence Mines. Silver was also present.

On July 4 of 1879, miners at a small camp just below the Divide struck gold. They named it the Independence claim after the holiday, and soon a small tent city developed on the site. The Independence Mine contained chalcopyrite, gold, and silver.

Independence was primarily a gold camp. It was also known, from time to time, as Mammoth City, Chipeta, Sparkill, or Farwell (Eberhart, 1969). The Independence Mine, contained chalcopyrite, gold, and silver. Gold Rush Expeditions, Inc. surveyors found good values of gold and silver on the surface of the mines but there were no open portals to examine the work underground.

The area is remote and accessible for only a few months out of the year which may account for some of the lack of development. At its elevation, winter comes early, October is common, and the snows do not melt off until May. The access road is closed from October to April.

Located 20 miles outside of Aspen Colorado.

The claims are laid out across what is thought to be the most significant portions of the Independence Workings. This includes many of the smaller portals and mines which are reportedly interconnected underground.

The terrain is very steep and rough with very little maintenance. The roads and 4WD trails on the claim are unusable at present and will need to be rehabilitated. The mine workings appear to only be collapsed by natural erosion at the portals and would likely require only minimal work to re-open and survey.

The claims are located at an elevation from 10,500’ to 11,250’ and will see significant snow fall each year. Planning should be put into this contingency to prevent loss of any work from snow or inclement weather.