Former Producing “Salt Chuck” Mine Alaska, USA was the largest producer of Palladium in the United States 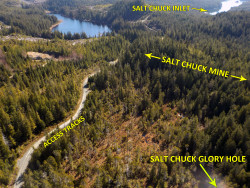 The former producing Salt Chuck Mine is contained wholly within the Kasaan Project area. Salt Chuck originally produced copper, silver and gold until platinum was discovered in the ore in 1915 and it wasn’t until 1917 that palladium was recognized. The Salt Chuck mine become the largest producer of palladium in the United States up until 1941 due to the outbreak of World War II. Palladium was then the main source of production income.

The deposit was mined in three glory holes connected by an intricate network of raises, stopes, and drifts at three levels. The workings connected to a main haulage tunnel at the 300-foot level that led to a mill (described in detail by Mertie, 1921) on the shore of the salt chuck at the head of Kasaan Bay.

In 1995, US Bureau of Mines undertook extensive investigation on the Salt Chuck Mine. The USBM geologists (Maas, K.M., Bittenbender, P E., and Still, J.C., 1995) reported earlier work in 1945 by the Bureau and provided a mineral resource of 244,545 metric tonnes of ore reserves with 0.6% copper, 0.45 g/t gold, 5.55 g/t silver, 0.1 g/t palladium from along the pyroxene-gabbro contact of the Alaska-type ultramafics. It is to be noted that the mineral resource estimate is not compliant to JORC Code or National Instruments NI 43-101 standards for reporting mineral resources and reserves.

Identified minerals within the project area are Gold-Silver-Copper-Palladium-Platinum-Strontium-Vanadium-Cobalt.

The Sunny VMS project is situated on the Prince of Wales Island in the Ketchikan Mining District, Southeastern Alaska Region, wholly within the Craig 250k USGS Quadrangle and Craig B-2 63,360 USGS Quadrangle; Copper River Meridian, Township 076S, Range 086E. The project is located approximately 29mi (46km) to the west-southwest of Ketchikan; and 251mi (354km) to the south-southeast of Juneau, Alaska’s capital city.

Access is via helicopter, boat, barge or float plane with tidewater located at Salt Chuck Inlet 280m to the south. There are forest logging and mining tracks from McKenzie Inlet to the project. The project is road accessible from towns Thorne Bay and Kasaan. All year-round operations are possible for exploration and mining activities. Extensive forest logging in the area has exposed new zones for exploration.

The Kasaan Project area wholly contains the former producing Salt Chuck mine (also historically known as the Goodro mine). The deposit at the Salt Chuck Mine was discovered in 1906 and originally produced copper, silver and gold until platinum was discovered in the ore in 1915 and it wasn’t until 1917 that palladium was recognized. For most of its life, the mine was the only and largest producer of palladium in the United States and the price of palladium, which varied markedly, was a key factor in the profitability of the mine. The Salt Chuck Mine closed in 1941 due to outbreak of World War II.

The Salt Chuck Mine is in a mafic pluton about 4.5 miles long and up to a mile wide in outcrop. The pluton consists of gabbro, clinopyoxenite, and diorite; most workers believe that the pluton is roughly cogenetic with the mineral deposit (Gault, 1945; Sainsbury, 1961; Gault and Wahrhaftig, 1992; Loney and others, 1987). Detailed studies by Watkinson and Melling (1992) and by Loney and Himmelberg (1992) describe the rocks in the vicinity of the mine as layered gabbro intruded by magnetite-bearing pyroxenite. The host rocks at the deposit are variably altered to epidote, actinolite, chlorite, sericite, titanite, and calcite. The pluton has been dated at 429 Ma (Loney and others, 1987). It intrudes metamorphosed volcanic and sedimentary rocks of the Descon Formation of Silurian and Devonian age (Eberlein and others, 1983; Brew, 1996).

The deposit consists chiefly of bornite, chalcopyrite, and platinum-group minerals that occur as disseminations or as veinlets and irregular masses in the gabbro and clinopyroxenite (Wright 1915; Mertie, 1921; Buddington and Chapin, 1929; Gault, 1945; Sainsbury, 1961; Page and others, 1973). The ore bodies are generally pods, lenses, and irregular masses with higher-grade cores. Numerous small faults cut the ore bodies. Most of the sulfides are in clinopyroxenite near its contact with gabbro. The ore minerals include varying amounts of digenite, chalcocite, and covellite that often rim bornite and chalcopyrite; they are mainly in irregular disseminated masses but some are in pyrite-pyrrhotite veins, and in epidote or calcite veinlets. The platinum-group minerals are mainly kotulskite (PdTe) or sperrylite (PtAs2), with minor amounts of the palladium-antimony minerals stibiopalladonite and isomertieite.

The deposit probably formed in two stages: 1) magmatic deposition of sulfides and platinum-group minerals, probably near the contact between layered gabbro and clinopyroxenite; and 2) remobilization of the sulfides and platinum-group minerals by low-temperature deuteric, or externally derived, chlorine-rich fluids with redeposition near gabbro-clinopyroxenite contacts.

A good deal of development was performed by Goodro (the discoverer) with ore shipments sent to the smelter, but most of the development was started after the Alaska Palladium Company took over the property in 1919. Extensive underground work permitted mining of the ore by the glory hole method, and a modern flotation mill of 300-ton capacity was installed. Concentrates were snipped on the motor vessel to Prince Rupert, British Columbia, Canada and from there by rail road to the smelter in Irvington, New Jersey. Due to heavy surface construction in late 1925, more than 70 men were on the payroll.

The workings of the Salt Chuck Mine are shown in detail on the maps and diagrams of Gault (1945) and Gault and Wahrhaftig (1992). The deposit was mined in three glory holes connected by an intricate network of raises, stopes, and drifts at three levels. The workings connected to a main haulage tunnel at the 300-foot level that led to a mill (described in detail by Mertie, 1921) on the shore of the salt chuck at the head of Kasaan Bay. The main drift of the 300 level is 1,380 feet long. The west drift of the 300 level is turned west at 1,000 feet from the portal, and the 315 and 316 drifts are turned west at 1,150 feet. There are several other drifts as detailed in this document. The 200 and 300 levels are also connected by a corkscrew raise from the 311 drift which enters the 308 stope on the south side and a short raise at the northeast corner of the 308 stope which leads to the southeast end of the 200 level. The 200 level is connected with the surface by a raise starting from a point near the raise from the 200 level from the northeast corner of the 300 stope. The 200 level is 110 feet above the 300 level and includes remnants of several drifts around the small glory holes as well as a north drift, a west drift and a drift along the east side of the mine. A third raise from the 300 level, at the intersection of the 300 and 314 drifts, opens into a small grizzly chamber which connects with the stope directly below glory hole No. 1. A fourth raise from the 300 level connects the 313 drift with two small stopes below the 308 stope and with the No. 5 stope. The 100 level is 90 feet above the 200 level.

During World War II, the U.S. Geological Survey and the U.S. Bureau of Mines studied the deposit in detail, drilled 13 holes, and reinterpreted 7 holes that had been drilled earlier by Solar Development Company (Gault, 1945; Holt and others, 1948; Gault and Wahrhaftig, 1992). Drilling results lead to delineation of a mineral resource estimate in 1945.

In 1948, geologists from the US Bureau of Mines (Holt, S.P., Shepard, J.G., Thorne, R.L., Tolonen, A.W., and Fosse, E.L., 1948) completed an investigation of the Salt Chuck Mine. During the investigation it became apparent that additional information on the factors controlling successful concentration of the ore to marketable products was desirable. Analysis of the mine ore sample is 0.68% Cu, 8.6% Fe, and 0.06% V205. No gold, platinum, or palladium was detected spectroscopically in the samples, but a trace of silver was found. Fire-assay fusions were made on the mine ore and later on the composite mill tailing. The treatment procedure involved tests on the flotation of the copper minerals and magnetic separation of the iron minerals. The flotation tailing was treated in a Davis tube to remove the magnetite. Results of the concentration testing are detailed in this document.

In 2007, as part of a larger company reverse-take-over merger, Pure Nickel Inc. (2007) completed surface mapping and sampling, targeting the North Pole Hill prospect which formed part of the Salt Chuck mine and unpatented claims held in the area. In December 2012, 2000m of drilling undertaken by Pure Nickel confirmed a new gold discovery at North Pole Hill. Intersections of 29.1 g/t gold over 2.58m and 1.2 g/t over 5.49 m were encountered. The gold discovery was associated with previously untested soil geochemical and IP anomalies on the Salt Chuck property; and IP and soil geochemical sampling extend 1.5 km along strike to the east and west, and a second gold in soil anomaly splays southward and continues a further 1.7 km. The reported anomalies extend to the limits of the surveys – therefore the potential mineralized structure is open in all directions. North Pole Hill anomalies were hypothesized to reflect the presence of the same style of remobilized magmatic Cu‐Au‐Pd‐Ag mineralization found at the historic Salt Chuck mine, located 2 km to the southeast. In addition to the remobilized gold‐copper mineralization, broad zones of anomalous palladium concentrations were encountered at greater depths in the westernmost drill holes, including NPH‐12‐02 where a weighted average concentration of 234 ppb Pd was intersected over 12.85 m apparent width. These anomalous Pd intersections appear to reflect primary magmatic mineralization, and they raise the possibility that remobilized Pd mineralization, such as at the Salt Chuck mine, may be associated with other structures not yet encountered in the North Pole Hill area. Pure Nickel proposed further drilling at the Salt Chuck property in 2014, but the project claims expired in 2016 due to other projects having higher priority.

Historical production of copper in the Ketchikan district clearly indicates copper deposits are well worth investigating by those who have the capital to develop and reduce ores on a large scale. The physical conditions seem almost ideal for cheap operations. Special attention should be directed to devising methods by which the iron content of the chalcopyrite-magnetite ores, as well as the copper, can be utilized. Also, no attempt historically has been made to concentrate the Ketchikan ore except by hand sorting.

In 1995, US Bureau of Mines undertook extensive investigation on the Salt Chuck Mine. The USBM geologists (Maas, K.M., Bittenbender, P E., and Still, J.C., 1995) reported earlier work in 1945 by the Bureau and provided a mineral resource of 244,545 metric tonnes of ore reserves with 0.6% copper, 0.45 g/t gold, 5.55 g/t silver, 0.1 g/t palladium from along the pyroxene-gabbro contact of the Alaska-type ultramafics.

It is to be noted that the mineral resource estimate is not compliant to JORC Code or National Instruments NI 43-101 standards for reporting mineral resources and reserves.

Nearby Mines and Resources