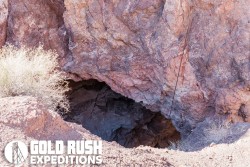 The Roadside Mining Property is a 20-acre lode claim exploring a series of horizontal epithermal gold deposits in the Union Pass Mining District of Mohave County, Arizona. The mine is an excellent stand-alone property as the deposits are relegated to a very small area. The mines have been held by various corporations and JV partnerships as late as 1996.

This is a commercial property and will not be able to be operated without significant investment and permitting.

A full-scale drilling and sampling operation was undertaken at the mine in 1990 which stated there was at least 450,000 tons of reserves at .03 ounces per ton with the majority of the site unsampled.
The value of these reserves today is $16.2 Million and there are other deposits and higher values mapped and defined on the property.

The site has been known as the Motherlode, The Arizona, The Arizona Rand, the Katherine Extension and many other names. The property has produced gold in substantial quantities in the past but has not operated on a commercial scale since prior to 1940.

Good access on county maintained road. 2wd with high clearance will have no issues. Bullhead City Arizona is 13 miles away.

The Arizona Rand or Roadside Mine as it has been known, has a long history of production and developments. It is a working gold mine with defined and documented reserve ore bodies consisting of gold, silver and copper. There are over 100 pages of documentation detailing the drilling and sampling of the mine over the past 40 years.

A chimney shaped are shoot with a flat rake to the north extended from the surface to the 100-foot level. It was 20 to 35 feet wide and 75 feet long on the strike. The ore averaged 0.28 ounce of gold to the ton. Despite the flat dip of the vein, the are was mined by a shrinkage method. In March 1934 about 10,000 tons had been broken, but only the swell had been pulled. Plans called for using a scraper for emptying the stope.
Chutes were 25 feet apart with pillars left between them. Although only a few pillars were left in the stope, no caving of the back occurred.
In the spring of 1935 the are was being mined by one machine miner, two men with hammers in the stope, two trammers on the 50-foot level, one bucket loader, and one topman. Hoisting was done in a 1,000-pound bucket and tramming in 16-cubic-foot cars running on 18-gage track. The water was kept down in the shaft by pumping two shifts each day with a boiler feed pump.

The following review of the property history is excerpted from Kirwin (1990).
The individuals who comprise ONANON Inc. began acquiring claims in the district during the late 1960's. An unknown group drilled 19 or 20 churn drill holes (at the property) before. Fischer-Watt leased the property from ONANON Inc, in 1984. The records from that period are fragmentary and do not aid measurably in understanding the deposit. Fischer-Watt drilled 28 reverse circulation holes in 1984 most of which were drilled at the Roadside(Arizona-Rand) mine. Anaconda sublet the property from Fischer-Watt and drilled ten diamond drill holes for 2,780 feet in a reconnaissance fashion throughout the claim block.

The reboxed core is now stored on the property in a recently completed core shed. Anaconda released their lease in 1985. Fischer-Watt drilled 15 Rye holes for 4,230 feet in August, 1986 to fulfill assessment requirements. Most of the holes were drilled in a reconnaissance fashion although a few were drilled at the Roadside (Arizona-Rand) mine. It was observed in the field that many of the 1986 Fischer-Watt holes were drilled into the footwall of mineralized structures parallel or subparallel to the dip of the structure, rather than crossing the structure from hanging wall to footwall. Nevertheless, several of the holes contain anomalous gold values. Fischer- Watt relinquished their option on the property in 1986. Ivy Minerals leased the property from ONANON in 1987, and carried out several drill programs on the Roadside (Arizona-Rand) Mine. Although some of the holes were drilled with a reverse circulation rig, many of them were drilled with a company owned track mounted percussion rig with a depth capacity of 100 feet. Most of the air track holes did not reach the mineralized zone at the Roadside mine. Ivy Minerals sublet the property to ACNC in July, 1989. During August, 1989 ACNC drilled 53 RYC holes to depths of 100 feet each to fulfill assessment requirements and to explore beneath the alluvial cover on the pediment. All holes reached bedrock but most did not intersect altered rocks. Preliminary mapping and sampling, during the Fall of 1989 indicated that the Gold Chain - Little Gold Chain Hill prospect should be drilled in 1990. Two more phases of drilling were completed during 1990 evaluating the Gold Chain area as well as several reconnaissance targets on the pediment. In July, 1990 ACNC canceled the lease agreement with Ivy minerals.

The Roadside Mine has over $137,000,000.00 in documented, blocked gold and copper reserves. This was defined by the USGS in 1996. The gold is native (free milling) and can be easily crushed and extracted. Reserves also contain 11% copper per ton. In a known gold producing district with excellent history of development and production. Drill and sampling records available upon request. Contact Jason with any questions or for more information regarding the mineral property