A Reporter Travels Through Venezuela, a Country Teetering on the Brink

PUERTO CABELLO, Venezuela — In the capital, water is so expensive and scarce that residents wait for hours with bottles at the side of a mountain where it trickles out onto the highway.

In the countryside, sugar cane fields rot, and milk factories lay idle, even as people carry bags of money around to buy food on the black market in every city and town.

And here in this port that once fed a nation, everything looks bare. Where a dozen ships once waited to enter, only four could be seen from a hilltop fort built long ago to guard against raids from the sea.

No one would pillage Puerto Cabello today. There is nothing to take anymore.

And it is all about to get much worse.

Inflation is expected to hit 720 percent this year, the highest in the world, making reminiscent of Zimbabwe at the start of its collapse. The price of oil, this country’s lifeblood, has collapsed to lows not seen in more than a decade.

For the last month, , chronicling its people, politics, language, quirks and culture through the eyes of a correspondent who moved here just as this country was heading deeper into economic disarray.

It was a project where fleeting moments carried the story: shouting matches during the first session of Congress; soldiers at the tomb of President , who died in 2013; letters from expatriates who had left because of crime and longed to return.

As I wrote about everyday interactions and exchanges, some themes became even more apparent. In Venezuela — a country where hospitals already lack syringes, supermarkets struggle to stock basic goods, and the government has declared an economic emergency while sitting upon the world’s largest reserves of oil — the strains just keep growing.

I visited a fish farmer who, after the fish feed ran out, resorted to grinding up beans and sugar cane, throwing them into a pond and crossing his fingers. (He got small fish.) I wrote about the bundles of cash needed to buy some coffee and water; a store that sold only broken toys; and the enduring loyalty of Mr. Chávez’s supporters.

With the photographer Meridith Kohut, I traveled across the country on what seemed, to many, the eve of a disaster. It showed in the faces of the people along the journey, 1,200 miles in all, starting at the coast, winding through the Andes and finally dropping down into Venezuela’s vast but dying agricultural plains.

Down the hillside in Puerto Cabello, a line formed in front of a grocery store, with hundreds of people looking for food. Many had arrived at 5:30 a.m., when rumor had it that a delivery truck had reached the store. At a quarter past 10, a policeman with a pistol monitored the door, letting in a dozen at a time.

The day before, there were beans, flour and milk for sale.

This morning, there was only cooking oil.

Ecio Corredor, who stood in line, said he lost his job in November. Ironically, he said, he used to drive the goods from the docks to the supermarkets.

“There are no more shipments now,” he said. He mumbled to Carlos Perozo, another driver, who said he had been out of work for a year because of a dead car battery. He could not find another, and could not afford one if he did.

“Be careful,” Mr. Perozo said. “Someone will come for yours.”

Palm trees lined an oil refinery. “We Are All Chávez,” was painted on the side of the facility.

In Morrocoy, the road ended at a pier. A boatman took us through a mangrove swamp that ended in a white sandy beach where Eduardo Vera and his wife, Carolina Morillo, had taken their baby boy for vacation.

The couple, once in the middle class, now survive on two salaries that have depreciated to the equivalent of $2.19 a day. They both have side jobs. “We can live, but not comfortably,” Ms. Morillo said. The vacation was a final splurge. 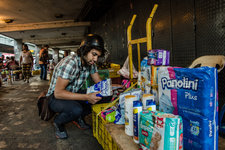 Interactive Feature | Moving to Venezuela, a Land in Turmoil Nicholas Casey, The New York Times Andes bureau chief, is chronicling his first 30 days living in Caracas, a city in the midst of great tumult and change.

The two, in their 30s, wonder about having another child, though it seems impossible to them now.

“We can barely find diapers or milk for José Antonio,” Mr. Vera said of his son. But one can hope for better times, he said, adding, “We want to get to know Disneyland one day.”

From the coast, we started inland, a journey that began with the discovery of black gold. Not of oil, of which there is plenty in Venezuela, but of black beans. There are almost none in this country.

Few producers make them anymore for the fixed government price. Octavio Medina bought them for 50 times that price and still sold them for an additional markup on the street. He says dozens of people buy bags, priced at half a day’s work at minimum wage.

We began heading into the Andes. The highway narrowed and curved up the steep edges of rocky roadsides.

“Are you here to cover the news?” a soldier at a checkpoint asked.

“The kidnappings,” he said. Ransoms are a business across this country.

Mérida sits between two high sets of mountains, a picturesque Andean university town. A cable car, said to be the world’s highest, once offered sweeping views of the valley. It now lies broken.

Frank Tirado ate in a restaurant with a wide smile and an innocent way of talking that belied the fact that he had just passed through some of the most difficult months of his life. He showed us a scar on the side of his head from recent brain surgery.

Several months ago, he started having headaches and losing his vision. His neurologist told him he had a brain tumor. If he did not have an operation soon, he would be paralyzed.

But the waiting list at the public hospital was more than a month, too long to survive.

A private practice could treat Mr. Tirado immediately, but only if he could pay. Two aunts in Florida wired him the money, he said. Mr. Tirado clutched a Christian prayer book and marveled at his luck to have had family earning dollars abroad.

Before leaving town, we made a stop at the cathedral where Vladimir Gutiérrez sat on the steps begging for change. He pulled a loaf of bread from under his shirt. His collection, 50 bolívars, would not be enough for a new one.

He showed fresh wounds from a recent knife fight that he said began after a man grabbed his daughter. “But I got him, too,” Mr. Gutiérrez said.

He seemed unworried by what lay ahead. He had hit the bottom long ago.

The road from the Andes spilled into Los Llanos, Venezuela’s agricultural heartland. Rodolfo Palencia, a rancher, spent an afternoon on his hammock, singing us songs he wrote about his state of Barinas, the most fertile part of his country, according to the lyrics.

But the ballads describe another time. Mr. Palencia took us to a field of sugar cane that was 10 feet high, and dead. The nearby sugar mill, built by the government in the early 2000s, could not process the cane this year, he said.

Fields where beans grew were fallow; there had been shortages of fertilizer this year, too. As far as the eye could see, we were surrounded by tall weeds.

And the milk. There is none there either, especially not at La Batalla, an operation that once produced 126,000 liters between three factories annually a decade ago.

It was nationalized, and its factory in La Sabaneta is now an empty outpost. The only employee is a watchman who opened the gate. The gauges on the pumps were unreadable. The cooling system had rusted open. There were bats here.

“Total loss,” began Alirio Alvarado, looking up from an agricultural pond where he once farmed a fish called cachama. Two thousand ponds are in this area, and farmers say they are mostly empty now.

It was Mr. Alvarado who put his own sugar cane and beans into his pond. The fish grew only to half the normal size. Then he ran out of beans.

“You might have said I should have sold the beans so people could eat them, but I had no choice,” he said.

A few miles away, Mr. Palencia, the rancher, took us to the factory that was meant to supply feed to the fish farms.

This place was never abandoned, because it was never opened, farmers said.

Inside, thousands of dollars of unused equipment sat rusting. An operating manual was unopened in a Ziploc bag. Receipts lay scattered on the factory floor from a German company named Andritz Feed & Biofuel.

“What a waste,” Mr. Palencia said.

A few moments later, a watchman appeared, startled that we had entered. He asked the rancher what his business was there. Mr. Palencia did not answer, turning to me instead.

“If we were run properly, this country could be richer than Saudi Arabia,” Mr. Palencia said.

He could barely contain his anger, at a loss for whom to blame. Was it Mr. Chávez, dead since 2013? Was it the curse of oil dependence?

Or was it the watchman who had only now shown up?

“I should report you,” said the rancher, pointing a finger.

“Don’t accuse me,” said the watchman.

“You aren’t even watching over this equipment,” said the rancher. “Someone could steal it. You do nothing.”

But it was too late. Mr. Palencia had walked away.