WASHINGTON — The ’s surprise decision Tuesday to could weaken or even imperil the international accord reached with great ceremony in Paris less than two months ago, climate diplomats said.

, the first accord to commit every country to combating climate change, had as a cornerstone Mr. Obama’s assurance that the United States would carry out strong, legally sound policies to significantly cut carbon emissions. Over history, the United States is the largest greenhouse gas polluter, although its annual emissions have been overtaken by China’s.

But in the capitals of India and China, two of the world’s largest polluters, climate change policy experts said the Supreme Court decision threw the American commitment into question, and possibly New Delhi’s and Beijing’s, too.

“If the U.S. Supreme Court actually declares the coal power plant rules stillborn, the chances of nurturing trust between countries would all but vanish,” said Navroz K. Dubash, a senior fellow at the . “This could be the proverbial string which causes Paris to unravel. The Paris agreement was a fragile and hard-fought consensus.” 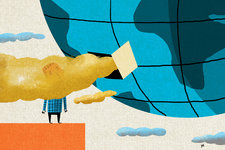 Interactive Feature | Short Answers to Hard Questions About Climate Change The issue can be overwhelming. The science is complicated. We get it. This is your cheat sheet.

The court’s verdict does not block the climate change rule permanently but halts its enactment until legal challenges against it have been decided, a process that could take a year or more. Legal experts said the justices’ unprecedented decision to stop work on the rule before any court had decided against it appears to signal that the regulation could ultimately be overturned.

“If the American clean energy plan is overturned, we’ll need to reassess whether the United States can meet its commitments,” said Zou Ji, the deputy director of the National Center for Climate Strategy and International Cooperation, a government policy think tank in Beijing.

“It had seemed that with the American commitments, it was possible to get on the right emissions path globally,” said Mr. Zou, who was an adviser to the Chinese delegation at the Paris negotiations, by telephone. “But without those commitments, that could be a blow to confidence in low-carbon development. In China domestically there is also resistance to low-carbon policies, and they would be able to say, ‘Look, the United States doesn’t keep its word. Why make so many demands on us?’” 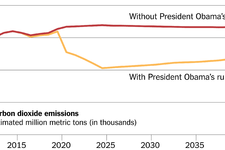 Mr. Obama sought to change that by putting in place a set of aggressive but politically controversial rules to cut planet-warming greenhouse gas emissions from coal-fired power plants. On the basis of those rules, Mr. Obama won agreements from China and India to enact their own pollution reduction plans, and helped push other countries into signing on to the Paris measure. Visiting Beijing in 2014, Mr. Obama made a joint announcement that both countries would enact concrete domestic policies to cut emissions.

Over the past year, Mr. Obama worked closely with the Indian prime minister, Narendra Modi, to bring India to the table for the Paris deal. Mr. Modi and many within India were resistant; the prime minister’s top priority is to make cheap electricity available to the 300 million Indians who live without power. If the United States reneges on its commitments, “it really would strengthen the hand of those who say Paris was ineffective and a bad deal for India,” Mr. Dubash said.

American policy experts agreed that the Supreme Court decision might be the first of many fractures in the deal. “The honeymoon for Paris is now definitely over,” said John Sterman, a professor of management at the Massachusetts Institute of Technology who attended the Paris talks.

“This pushback is not something that’s unique to the United States,” he added. “It’s happening all over the developed world.” 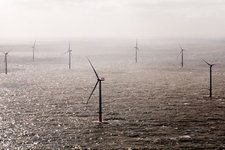 In the European Union, Poland and some other coal-reliant countries have resisted signing on to the bloc’s commitment under the agreement to more stringently reducing emissions across member states.

While the Paris deal was completed in December, it has not yet been signed. Secretary General Ban Ki-moon has invited world leaders to a signing ceremony in New York on April 22, . Those who do not attend the gathering will have several months to add their signatures to the formal document.

Already, some people deeply familiar with the climate negotiations worry that the events in the United States could lead to a repeat of what happened after the signing of the 1997 Kyoto Protocol, the first major climate change treaty. Vice President Al Gore, a staunch environmentalist, negotiated the treaty with other world leaders. But in Washington, the Senate voted against ratifying it. Then George W. Bush pulled the United States out entirely.

The Supreme Court’s decision — particularly if it ultimately strikes down the rule — will put United States climate policy, and its participation in the Paris agreement, largely in the hands of the next president. While the Democratic candidates Hillary Clinton and Bernie Sanders have pledged to continue and strengthen Mr. Obama’s climate change agenda, the Republican contenders, including Donald Trump, Ted Cruz and Marco Rubio, have questioned or denied the science of human-caused climate change and have sharply criticized the Paris Agreement.

“Who can we negotiate with if the White House can’t be sure if it can keep its promises?” Mr. Zou asked. “Not the Congress. Not the court. The division of powers creates a very complicated situation.”