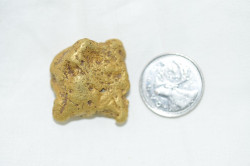 The placer gold on this creek is 88% gold and 12% silver with 5 different sources identified to date. An average of 14' of gravel overburden and a couple feet of permafrost to pay. Several test pits on the right limit and up the gut were done with very positive results from a low of 0.6 grams per yard to a high of 4.2 grams per yard. The overall understanding of the creek has taken years of prospecting, testing, sampling, drone and ground imaging.

Frisco Creek is located just downriver of where the White River enters the Yukon River, and upriver from the Stewart River. Frisco Creek is currently accessible by water and air. A 100,000 lb capacity barge owned by Schmidt mining brings in fuel and large equipment. Frisco Creek is in the heart of the “Golden Saddle”, the area where the hard rock staking rush in 2008 started. The hard rock in the area is now wholly owned by White Gold Corp. There is a great deal of information on their website about the ground surrounding and directly under the creek.

Frisco Creek is within the Klondike Plateau in the Central Yukon ecoregion of the Yukon River drainage basin and escaped all but local alpine glaciation during the last ice ages. Discontinuous permafrost exists in all areas with most areas lacking southern exposure or blanket with muskeg having permanently frozen soil. Frost heaving on ridges and
solifluction lobes on slopes are common.
The region consists of low-relief rolling plateaus cut by deep, generally narrow V-shaped drainages. Elevations locally on the Property range from just over 4000’ to 1200’ at the mouth of Frisco.

There is historical data showing the "oldtimers" from the late 1800's worked in this area pre and post the great gold rush of 1898.
Essentially, a valid hard rock source(s) of native gold exists within the watershed of Frisco Creek, the area is unglaciated and course gold has been recovered at good grades and shallow depths strongly indicating that there is great potential for an economically viable placer gold operation in this watershed.

To be provided after signing confidentiality agreement.