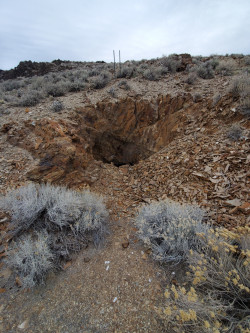 The Goldfinch mining claim consists of one (1) unpatented lode claim covering 20.66 acres on federal land managed by the U.S. Bureau of Land Management located in Humboldt County, Nevada. The claim has three (3) mapped adits and several prospect pits and ore piles. The claim covers the historical Upper Wheelbarrow / Excaliber mines that produced high grade gold and silver ore in the 1860’s to 1870’s.

Mining and Exploration Potential: The Goldfinch claim has the potential for additional high grade gold veins, large bulk tonnage gold and silver deposits, and tungsten deposits (Mill City is the top tungsten district in the US).
The Goldfinch claim has parallel sets of vuggy, gold bearing quartz veins that can be 6” to 3 feet in width.
There are several quartz outcrops that have not been mined along with the structures near the adits which could be further explored.
The gold deposits in this area occur on the contacts between the granitic intrusives and the older metasediments. The Nevada Bureau of Mines reports that a diorite dike has been exposed in one of the Wheelbarrow Mine adits. This is a good sign because it means that in additional to the main intrusive there are dikes and sills that could generate gold mineralization. Exploring and mapping the diorite contacts would be a good way to find additional gold deposits.
Gold and silver veins may be covered by a thin layer of soil and could be found using soil sampling.
This area of Nevada is famous for large, bulk tonnage gold and silver deposits and the Mill City District is under-explored for gold.
Additionally, there is the opportunity to discover tungsten – which is considered a strategic metal. The Mill City District is famous for its tungsten deposits.
The Mill City District is centered around the Eugene Mountain Range. The north end of the Eugene Range is in Humboldt County, but most of it is in Pershing County.
The Mill City District was previously called the Central District. The Central District was organized in 1862 with most prominent mines being the 56 Mine on the south end of the Eugene Mountains and the Golden Age on the north end.
The Wheelbarrow / Murrietta / Excaliber mines that the Goldfinch claim partially covers were some of the original mines of the Central District and produced shipping ore in the 1860’s to 1870’s. During this time period only the highest grade ore was shipped since transportation difficulties made it expensive.
The 56 Mine was drilled in the 1940’s and recorded a high grade molybdenite discovery. This may indicate some porphyry potential in the district which could be significant.
Few records exist from the early days (pre-1900) however there are shafts, adits, ore piles, and other workings to evidence the activity – which was extensive.

Regional Geology: The Goldfinch Mine is located within the Basin and Range physiographic province. The Basin and Range province covers most of Nevada and consists of narrow NE trending mountain ranges between flat, arid valleys and basins. The country rock is shales, quartzites and limestones. In the Jurassic and early Tertiary several small granidiorite stocks intruded the country rocks and altered them to hornfels, marbles and tactite.
Local Geology: The Goldfinch claim is on the northeastern side of the Eugene Mountains. In this part of the District shales have been metamorphosed into hornfels. A diorite dike that may be related to the intrusive that caused the metamorphism and mineralization is exposed in one of the adits of the Wheelbarrow Mine. Several granidiorite intrusives outcrop in the district and many more may be under-cover.
The Goldfinch veins are hosted in tan, shaley hornfels. Veins are found in shear zones and along the foliation planes and strike N80E. Quartz veins are vuggy and some have large crystals. The largest ore dump has galena and sphalerite clots in vein fragments. Wall rock is bleached and laced with iron oxides.
A Nevada Bureau of Mines report mentions that there are several parallel veins in the claim area.
To the east about 1 mile are basalt / andesite flows which are recent and post-mineral.

The Mill City District is mostly known for tungsten and has one of the largest tungsten deposits in the US – the Springer Tungsten Mine. Several of the gold mines also have tungsten (scheelite) deposits.

Tungsten was first discovered in the district in 1916 as part of a rapid, US government effort to obtain the metal for World War I. When the war ended in 1918 – most of the mines were shut down and/or sold. The Nevada-Massachusetts Company consolidated most of the tungsten mines in the district and operated them from 1925 to 1958. During WWII the district was very active and profitable (tungsten is used in armor plating, tungsten carbide drills, and artillery).

The Springer Mine complex was sold to General Electric in 1971. GE conducted a massive exploration and mill construction program in the 1970’s. The mine was sold to EMC Metals in 2006 and is now held by Silver Predator and America’s Bullion Royalty (junior mining companies).