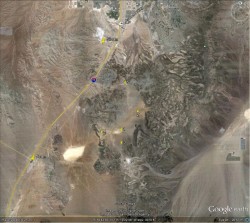 The Hidden Valley fertilizer deposit is surrounded by nutrient-rich ancient volcanoes and is located in the Northern McCullough Mountain Range.
From a 2014 Geology and Geochemical Report:

GEOLOGIC RESULTS
Piedmont is a broad, generally low-relief area extending from the base of a mountain range toward the center of a valley. The valley axis may host an axial stream, river, or wash; or a lake or playa. The latter is the situation for piedmonts such as in Hidden Valley. Piedmonts are composed mostly of alluvial sediment shed from adjacent highlands by stream and debris flows. The valley sediments may contain eroded bedrock as well as other types of near surface geologic materials which include: washes, inactive alluvial fan remnants, pediments, sand sheets & dunes, and lacustrine beach deposits. Desert piedmonts contain a geologic record of geologic events including: tectonic activity, flooding, changes in climate (House, et al., 2010).

Desert piedmont deposits are composed of stratified sediments (gravel, sand, and mud) transported by flowing water or debris flows (alluvial deposits), wind (aeolian deposits), by settling from standing water (playa deposits), and by physical weathering and mass wasting of steep bedrock cliffs and slopes (colluvial deposits). Based on this geologic summary, Sites 1, 3 (5 QA/QC), and 6 were located on the northern, southern, and eastern fringe zones of the Hidden Valley playa, respectively. Soil samples collected from these sites consist of a mixture of playa, aeolian and alluvial deposits.

The sample collected at Site 4 consisted of alluvial material derived from a basaltic or mafic rock type, which was supported by the geochemical results. Site 2 consisted mostly of alluvial deposits with a strong aeolian component.

Aside from the surficial materials present in Hidden Valley, bedrock types observed in the study area include: rhyolite which is capped by basalt, limestone, and possibly some intermediate volcanic rocks such as dacite. There were no bedrock outcrops near any of the sites.