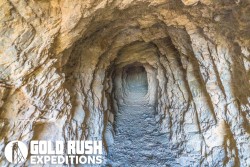 Lodi District – Nye County, Nevada
Can drive to one adit where you can park and stage your gear. The second adit and 2 shafts on the claim you can drive to within 200 feet from but the road has been destroyed directly to these mine entrances.
3 miles of dirt road off the highway. The last 1 mile drops into a wash which is sandy and rocky and will require 4WD preferably with high clearance.
Contact us for exact coordinates.

The Aunt Ethel Mine is a previously producing, small scale gold mine. The mine has direct, but rough access, hidden up a forgotten canyon in the Lodi Mountains. The road to the mine is still intact but has deteriorated significantly, it is very overgrown.

The Aunt Ethel Mine was historically worked for native gold with some success. Gold was separated with an arrastra and then smelted into rough bars on site. Silver and lead were noted as by-products which only hindered the processing. Logistics of acquiring tools and mining implements were noted as a major issue.

The Aunt Ethel Mine today is a good starter operation for small operators. Veins are clearly exposed and show gold with some Galena as reported by surveyors. There are bodies of quartz that will contain good amounts of raw minerals once crushed. These veins would be most economically worked by hand.

There are two shafts and two adits on the Aunt Ethel Mine property. One adit exists apart from the main mine and does not intercept any major deposits. This adit is roughly 80'. The main processing and camp area is in relatively good repair but all of the buildings have collapsed.

Deeper into the Aunt Ethel Mine Property, two shafts are connected to a lower, haulage type drift which exits the mine in a wash. The lower adit connected to the 2 shafts provides good airflow. The mine is hard rock and cut in stable, competent rock. The Aunt Ethel Mine appears to have been left mid shift. Ladders, in good repair, appear to have been left in a stope the miners were working. There is a second drift level inside the main workings which chases a quartz vein with some visible gold flake. There is only exploratory drifting on this level.

Triassic limestone and lime-shale, probably dolomitic, are the principal host rocks for the ore deposits in the area. These sediments have been intruded by a granodiorite stock indicated by Muller and Ferguson to be Jurassic. Nearly all contact areas have been intruded by lamprophyre dikes. The youngest rocks in the district are Tertiary lavas and minor dikes which are found principally on the northwest slope of the Lodi Hills.

Lead-silver ores with a varying gold content have by far the most economic importance in the area, with the illinois mine and quartz mountain being the principal producers. Ores principally valuable for their gold content have been mined in a small way in several parts of the district, with the old camp called Granite at the southern tip of the Lodi Hills probably making the only appreciable production form gold occurring in seams and pockets. Recently, tungsten in the form of scheelite has had much attention as the Kay Cooper and Victory properties near the south end of the district have found fair grade mill ore with indications of substantial tonnages. Talc has been shipped form a deposit in the northern part of the district.[1]

The Aunt Ethel lead-silver prospect is situated about 10 miles north of Gabbs on the west slope of the Lodi Hills. It was originally located as the Iron Mountain group and in 1934 relocated in seven claims by the present owner, Charles Douglas of Quartz Mountain. The ore occurs in small seams containing limonite, cerussite, and galena in steeply tilted calcareous sediments cut by porphyritic rhyolite dikes. Sorted ore is reported to assay a trace of gold, 12 ounces silver, and 27 percent lead. Workings consist of three shafts, each about 65 feet deep ; a short adit; and several open cuts. No production has been made as the property is strictly a prospect. A report on this property by Fred Humphrey is on file in the Bureau office.[1]

It was once owned by Charles Douglas of Gabbs Valley. Reportedly There were 3 shafts developed on the claim 60-65 feet and a 60 foot adit. Noted for its lead and silver.[2]

Access to the Mine: Can drive to one adit where you can park and stage your gear. The second adit and 2 shafts on the claim you can drive to within 200 feet from but the road has been destroyed directly to these mine entrances.
Tailings Present: 10,000-49,999 tons, Iron stained quartz and gray rhyolite. Not much indication of good ore recovery from top. Lower adit tailings appear to be more processed and mostly waste rock.
Entrance:Solid Rock
Mine Cut: Shafts and adits
Depth / Length: 600 total
Minerals in the Mine: gold, silver, lead, quartz
Foot Traffic in the Mine: None
Last Worked: 1951