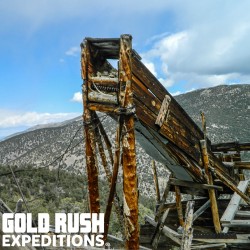 The Grand View Mine is best accessed from Baker, Nevada. But if you are coming from the west, its only a 45 minute drive up Hwy 93 to the turn off that takes you directly to the claim. The road was in good condition when surveyors documented and staked the claims. The road will require 4 wheel drive for some steep ascents and loose rock and shale. It's reportedly a rough road that is not for the weak of heart. This offset by the stunning view of the property from the ridge on approach.

The Grand View Mine Claim covers the general northward trend of the lode which has been cut and defined by portals. The mine is opened on the exposed gold/quartz outcrop. The corners are staked on the exact coordinates with no witness posts. The property covers well over the peak of the hill, behind the mine and past the road that runs around the hill and down into the gulches.

Surveyors report extensive development and base infrastructure, though the property is largely undocumented. Surveyors documented two (2) collapsed cabin/bunkhouses on the property. The age of the wood and remnants indicate the buildings were constructed prior to 1900 and inhabited until at least 1940. In relation to mining structures, there is an ore tipple and chute. The tipple has collapsed, leaving the chute in place. Extensive miners trash piles in the washes around the mines, these are loaded with cans, bottles, boots and all manner of miscellaneous trash.

It's a stunning country, and quite high for Nevada. It's common to still have snow pack present in July most years.

There are two (2) portals open currently on the claim, which leads to substantial underground development. Due to snow levels at the time of the survey, the surveyors were not able to access and document the upper workings. The first portal is a standard hard rock adit. The other portal, a little higher up the mountain, is cut a little wider and drifts for less than 50 feet before opening into a massive stope. There is an entire mining camp present on the property. This speaks volumes of the work and effort in the development of and potential for the mines.

The upper adit, which is cut into solid rock and very stable and tunnels into the mountain for about 50 feet before opening up. It very quickly turns into a large stope, this stoping gets very steep and is running right along a major fault line, up and into the mountain. Ideal for pulling those expensive minerals that push up out of fissures. The survey team was able to document 80 feet into the stopes. Steep inclines and water made for slick surfaces. Surveyors estimate roughly 200 sq. ft. of stoping.

It would appear the mine has not been addressed for 70-80 years. There is exposed rail and some mining artifacts of days gone by just inside the lower adit entrance. This is a proper portal and offers good, stable access into the workings. There is a good flow of air present throughout the mine. Air levels were stable and showed no deviation. The drift travels back for 30 feet to a section of slough from above. An assumed winze or possible stope that would need to be cleared to further survey and document. There is documentation of multiple levels in the mine and this may provide access to some of those.
The drifts work off to the North, East, and South. The southern drift is 50' of solid workings with dark iron on white quartz being the vein of most interest.

To the east, surveyors cleared the existing slough to access the drifting, the cut runs straight to the east for approximately 32 '. Quartz veins in the eastern drift show gold and some possible copper. This section of the mine may have been used as a high grade bank and there are many artifacts in the drift from mining days past.
The last drift runs to the north, it is a short drift, less than 20'. There is no obvious mineral of interest to note. However, this section of the mine runs right into the large, open stope from the other mine entrance. This mine is laid out for easy work and extraction, even without fixing up the ore chute and tipple outside. The veins are large and high grade ores could be easily picked and chiseled out.

Parking and staging will not be an issue. The road is in excellent repair and wide enough you to drag whatever you would like up to the site. There are some switchbacks on the way up which may pose a challenge for long trailers.

Surveyors found NO footprints or evidence of intrusion inside or out. Not even footprints inside. There was no evidence of survey work or any other recent work.

The Grand View mine could be worked in various ways, the simplest would be by casual use in sampling and creating assay reports. From this point, the mine could expand based on capital. There is evidence to support that the veins in the mines have only been minimally worked. Full scale development would likely result in a clearer picture of the potential and reserves of the site.

The Mount Moriah District is divided into two major geologic terrains separated by the Snake Range decollement, a slightly warped, low-angle to flat-lying fault separating rocks of different lithology, age, and metamorphic grade. Rocks below the fault consist of Precambrian and Cambrian metamorphic quartzite, schist, phyllite, and marble which have been intruded by Cretaceous or Tertiary granitic magmas.

At the Lead King mine, on the northwest, clots and lenses of fine-grained, crystalline galena and quartz occur along bedding in silicated limestone of the Cambrian Pioche Shale. Replacement ore bodies at the Silver Peak mine, at the head of Smith Creek, occur in marble of the Cambrian Pole Canyon Limestone along a fault contact with underlying quartzite of the Pioche Shale. Other small vein and replacement deposits of lead-silver ore occur in faulted Cambrian limestones at the Galena mine, near the mouth of Smith Creek, and at prospects in Hendrys Creek and in Old Mans Canyon, along the southern part of the area. Tungsten occurs in one small prospect about two miles south of Dry Canyon, on the west side of the Mount Moriah area. At the Grand View prospect, coarse-grained scheelite occurs in silicified limestone along a 6-inch-thick streak of quartz, calcite, and galena. The prospect occurs in cambrian Pole Canyon Limestone, about 100 feet above the contact with the underlying Pioche Shale[1]

The Grand View Mine was first worked for gold, it's estimated that around 1870-1874 the mines had been worked by prospectors for the native gold deposits. The gold ran with scheelite. Scheelite is a calcium tungstate mineral with the chemical formula CaWO4. It is an important indicator of native gold deposits. The Fluorescence of scheelite is usually indicative of an association with native gold. While scheelite has no economic value, it is used by geologists in the search for gold deposits. It is assumed that with the silver crash and general depression in mining around 1893, the mines were abandoned and forgotten.

The Grand View Mine was again worked from 1927 to 1939 when a group of indigent prospectors from back east came to the mines seeking reprieve from the great Depression. The cabins that had been built in support of the previous mining operation were utilized over the cold winter while the miners blocked out large deposits of gold ore.

With the War Act, the mine was again abandoned. When the War Act was repealed there was a federal bounty being paid for tungsten. Tungsten was used to harden steel and a vital part of national defense. Many unscrupulous prospectors and ranchers began locating old gold mines as Tungsten mines. Tungsten and scheelite are often found in great quantities in gold mines. If the mine was located as a tungsten mine, the locator could expect a federal payment of at least $5000.00 without having to ship any ore. This program was short lived due to the amount of fraud that was perpetrated, but it left many of the old Gold mines across the West improperly labeled as tungsten mines.

The Grand View Mine is just such a site. With visible gold deposits inside, the mine never produced a single gram of Tungsten. The incorrect and unverified history was recorded by some poor fool in 1943 as follows:

The Grand View claims are on the west slope of the Snake Range about 15 miles north of Sacramento Pass...They are reached from paved U. S. Highway 6 by following the graded dirt road along the east side of Spring Valley for 15 miles north of Sacramento Pass to a point 1.4 mile south of the Eldredge Ranch, then turning east for 5 miles up an unimproved road. From the end of this road, the claims are a mile by indistinct trail that goes over the ridge to the south into the next canyon.

The 4 unpatented claims were located by Wm. W Choate on July 10, 1943 in the name of the Black Mountain Mining Co. of Delle, Utah. This company is a limited partnership of about 25 people, with Wm. W. Choate as general partner in control. The scheelite occurrence was first discovered by an Indian named Chidester, who works for Choate.[1]

Mr. Dwight Lemmon further goes on to state that there is no tungsten of any value and the only interesting aspect of the claim is a quartz vein with heavy galena. To make matters more confusing. There was never any scheelite of any substance discovered at the claim. The district and the mines are reported as being worked for gold, silver, copper, and lead.[2]

Access to the Mine: Stable, easy.
Tailings Present: 700 + cubic yards, Copper, Quartz, Iron.
Entrance: Hard Rock- stable
Mine Cut: Adit
Depth / Length: Est. over 2000'
Minerals in the Mine: Gold, Quartz, Copper
Foot Traffic in the Mine: None
Last Worked: 1941