Historic Illinois Mine and Mill 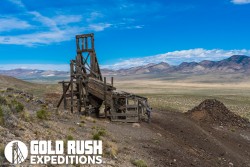 Gold Rush Expeditions, Inc. is proud to present the Historic Illinois Gold Mine Property. A grouping of 8 lode mineral claims with a total area of 160 acres. The Illinois Mine lode mineral claims are for sale exclusively through Gold Rush Expeditions, Inc. The Illinois Mine property is located just outside of Fallon, Nevada and has been properly staked and marked at all corners.

One of the largest and most valuable sites in Nevada with documented gold and silver ore reserves of over 50,000 tons with a value of over $38 Mil.

The Illinois Mine property consists of a series of adits and shafts with mapped and documented workings underground.

The remains at the mill provide evidence the claims were worked primarily for gold. Gold screens, shaker tables and more. Processing likely refined dore bars with those base shipped out for final processing.

There is also an assay office where surveyors found remains of more slag, crucibles, cupels and an oven. Inside the assay office was a large safe which likely had multiple uses. Unlike other mills, there is a large underground tunnel that leads from the upper assay area down into a smelting/slag area where there were multiple ovens and machines working.

There is a large brick structure with old style locking windows, obviously very secure at one point with beautiful stone mason work on walls that are 25 feet tall and 75 feet long.

The mines on the Illinois Mine property are in surprisingly good condition. Most of the workings are interconnected and air quality was clean and consistent throughout the workings. The drifts and shafts are timbered in the main workings. There are many ancillary drifts and shafts that have rough entrances but these are not vital to the operation and provide no real benefit with the exception of air flow.

The Illinois Mine workings are cut into stable and competent rock. There is mapping from 1930 and 1973 available with geological guesstimation. The drifts have been run with water and air lines, probably circa 1970. Additionally, there has been electrical lines run into the top two levels with lighting and new wood supports. The lighting is designed to be run off of generators which can be easily staged outside the main adit entrance. Surveyors estimate over 10,000 feet of workings on at least 5 levels. There are winzes and drifts all over connecting multiple mine entrances.

There are some drifts that appear to have been mucked in. Some areas of stoping were noted and many, many sample sections are blocked and marked.

There are, as noted below, at least $38,000,000 in blocked reserves in the mine. This does not account for new drilling and sampling and increased gold values as the mine goes deeper.

This Illinois mine should be viewed as a commercial operation. This mine will not be viable to small miners or casual use operations. There will be money required for a plan of operations and bonds to bring this mine to active status again.

There are also numerous structures on the Illinois Mine which can be utilized as is or repaired in some cases. The garage can be used as is. Millsite could be usable but existing structures at the mill would probably be obsolete. House on the claim would need to be repaired to be usable with minor improvements. Headframe is close to usable with. Most of the winzes in the mine have internal supports that could be used to assist in accessing lower workings.

Triassic limestone and lime-shale, probably dolomitic, are the principal host rocks for the ore deposits in the area. These sediments have been intruded by a granodiorite stock indicated by Muller and Ferguson to be Jurassic. Nearly all contact areas have been intruded by lamprophyre dikes. The youngest rocks in the district are Tertiary lavas and minor dikes which are found principally on the northwest slope of the Lodi Hills.

Lead-silver ores with a varying gold content have by far the most economic importance in the area, with the illinois mine and quartz mountain being the principal producers. Ores principally valuable for their gold content have been mined in a small way in several parts of the district, with the old camp called Granite at the southern tip of the Lodi Hills probably making the only appreciable production form gold occurring in seams and pockets. Recently, tungsten in the form of scheelite has had much attention as the Kay Cooper and Victory properties near the south end of the district have found fair grade mill ore with indications of substantial tonnages. Talc has been shipped form a deposit in the northern part of the district.[1]

In 1973, Geologist David Evans conducted a geological survey of the site in response to an application for bank financing of a new operation. While the surveyor was notably biased against the mine, he was forced to report vital data which shows the operation to be nothing less than a valuable property ripe for the development. This including more than 50,000 tons of gold and silver ore reserves, both blocked and inferred.

1914-1966 Goldfield Consolidated did exploratory work on the mine's lower levels; and sank the Sand Mound shaft from which no production is reported. Bradly Mining company of San Francisco did considerable work, both in the Illinois and Sand Mound shaft areas. It is believed that some mining was done by leasers but no information is available.

1966-1973 The New shaft was sunk and access on the 200 and 470 levels driven. Involved in recent activity have been Mr. James Lynch of Gabbs, Heald and Heald, and others, all active in the Illinois-Nevada Corporation.[1]

It has also been noted in many geological and historical reports that the values in gold increased as the mine was driven deeper.

The mine was discovered in 1875 by Alfred Welsh. The first work was done upon the Illinois vein. Welsh was poor and during the years 1876 and 1877 only the assessment work required by law was done. In the latter part of 1877 he made an agreement with Raymond and Ely of Pioche, Nevada, whereby they undertook to drive a tunnel on the vein until is should reach a depth of 100 feet, and whereby they agreed to buy the property. They erected a small ten-ton smelter on the property, which was operated for about two years, during which period a body of ground of small lateral extent on the Illinois vein was worked to the depth of about three hundred feet. All of this was hand work, the ore being hoisted by hand windlasses; but the exceeding richness of the mine enabled it to pay handsomely, even against such obstacles, and about $500,000 worth of bullion was disposed of during these two years. At this time Raymond and Ely were also operating heavily at Pioche where their operations were not profitable. They became involved and their creditors wiped them out. A balance was due Welsh on the purchase price of the property, for instead of paying for the mine out of the proceeds of it, Raymond and Ely had been investing in their Pioche operations the money they were securing from the operation of the Illinois vein.

Welsh, therefore, put in his claim for the balance due him on the purchase price, and in the final settlement of the affairs of Raymond and Ely. Welsh came out of the settlement with a two-fifths interest in the Illinois group, and Messrs. Booth and Company, wholesale grocers of Sacramento, California, got the remaining three-fifths. The smelter had not been paid for so that the people who had erected it came and took it away.

The property then closed down and remained closed until 1889. Welsh, penniless, borrowed $250 from an ore purchasing firm and secured a lease on his interest. During the following 18 months, he sold them $130,000 worth of ore. He made further shipments to other smelters exceeding $250,000. He then purchased the three-fifths interest from Booth and Company for $10,000 cash and agreeing to make further payments of $5,000 a month.

Just at this time when the mine was producing royally and prospects seemed bright, Welsh decided to visit his family back east. He found all his kin hard up, so he paid off all their mortgages. One brother, however, had no mortgage, and therefore did not receive any money, and began to make threats about what he would do unless Welsh equalize him with the rest of the family. Welsh brought that brother back to the mine. The friction between the brothers increased until one day in 1891 the younger brother placed a double-barreled shotgun against Welsh's stomach and blew a hole through him as a final argument and fled.

There was no one to continue the work in the mine so all operations stopped. Booth and Company enforced their mortgage and took over ownership. Ownership passed into the hands of T.G. Phelps, a member of the Booth firm. He died shortly after this, and the property lay unworked until 1905. At this point the mine was dismantled, buildings destroyed, and old workings wrecked. A new owner brought in a small steam hoist and drove a shaft down through the old workings. Ore was struck in 1906, and since that time the property has produced approximately $325,000 in ore. Thus, the production of the mine to date has been something over $1,000,000. The mine was closed down on April 1st, 1914, on account of encountering water in the Illinois shaft; not, however, until the continuance of the ore body had been demonstrated, as the last samples taken from the shaft had shown a great increase in the gold content of the ore.

The property was readied for production again in 1914-15. The following is an inventory of the site:

"Kindly notice the above report is dated May 1, 1914, since which time the smelter has been replaced by a mill, as it has been found that the ores will concentrate and cyanide to better advantage. THe ore stock around the old smelter has been disposed of, and the steam hoist replaced by a gasoline hoist. The other conditions remain practically the same except the machine shop and other equipment not necessary to smelter maintenance.
-Update on Report on the Illinois Mining Group, September 23, 1925"[2]

The mine was examined after the repeal of the War Act. The surveyor was not optimistic. The majority of the metal items at the mine had been looted for scrap metal:

"About all equipment purloined; smelter and mill disposed of or stolen in parts. A mine without equipment instead of equipment without a mine.
1948 June 23"[2]

Access to the Mine: The main workings on the claim are drivable. There are some smaller workings that will require hiking.
Tailings Present: 50,000 + tons, Some high-grade ore piles seen. Iron, quartz, likely molybdenum, tungsten, galena and fine GOLD.
Entrance: The majority of the mine entrances are cut into hard rock and then collared and timbered on the shafts.
Mine Cut: Shafts and adits
Depth / Length :Over 5000' documented
Minerals in the Mine: Gold, Silver
Foot Traffic in the Mine: Moderate
Last Worked: 1938