Colorado Gold Mine For Sale 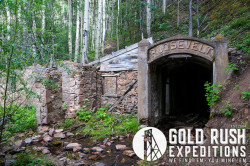 The Roosevelt Mining Claim is located in the Gold Brick Mining District, east of the Camp Bird Mine. The property consists of three (3) Lode Claims and one (1) Placer Claim. Total land coverage of seventy (70) acres. The property contains a large span of riverfront which originates far past the town of Pitkin and Ohio city, washing the dumps and tails of many massive mines. Black sands containing small grains of gold are found throughout the river and a surveyor in 2016 reported finding a 0.7 oz. nugget while panning samples.

The mine is cut on a wide quartz vein within which, a series of small fissure veins said to contain bits of free gold along with copper and some galena. Surveyors extracted some high-grade vein material from inside the workings at four stations and marked high gold valuations.

The Roosevelt tunnel, while started as a small gold mine, was acquired and funded as a portal to intercept a series of vertical veins said to be at least 800’ in length containing appreciable amounts of native gold. Surveyor mapping the drift documented 4,270 with many drifts unexplored due to low oxygen levels and high water.

A road is close, but you will have to hike in.

The mine has suffered from restricted access since 1940 according to local accounts. The bridge which spanned the river and much of the electrical power station equipment was taken for use in the WWII efforts. The site is not readily visible from the county road, and access is only gained by a short, but steep hike to the mine camp site.

There is quartz, copper, and some silver visible in the waste dumps. The mines primary export and value is gold with secondary copper. There are reports that the mine produced average gold values of $40-50 per ton (2-2.5 oz Ton) prior to 1919.

Original purpose of the mine was to intercept the Roosevelt vein and to cut underneath the Camp Bird Mine and dewater it. The mine was reported as dry up into 1919 when the last documented work was completed. They were reporting a depth of 1800’ at that time. Today there is considerable water discharge from the mine. A crosscut in the mine at roughly 2700’ in has 3 drifts that are dammed. The air drops to 13% at this juncture and the water in the dammed drifts is 3-4’ deep. The drifts continue farther than high intensity lights can see. Laser measurements also failed.

The mine is largely a gray slate host rock throughout, except for where the mineral veins are encountered. These veins are largely quartz with iron, gold and some copper-based minerals. Gold is readily visible in some sections of the veins and “stringers”. There are various short drifts in the workings that begin some exploration of the veins, but none were surveyed that were developed to any commercial extent.

The low oxygen in the deeper regions of the underground indicates that there is no current pass through the mountain that would allow air to flow through. This condition should be mediated prior to any work being carried out in the workings. A series of fans with standard duct work would suffice.

The shell of a power plant exists below the mine workings and was in use up to 1932 to power the mine camp and the crusher. There is substantial buildup of black sands and gold bearing material in and around this structure which is directly in the river (which was used to produce electricity). With the abundance of gold mines up the canyon from this site, there will likely be good recovery possible from these placer deposits. They have not been tested, or verified, or added as a source of valuation for the property.

The mine will require some investment and permits to be put into a working state. There is a series of good roads on the claim, however, a bridge will need to be built to access these roads. The mine is one of less than a handful of properties left in the United States with such an intact mine camp, masonry work and extensive, intact workings.

Waste dumps and tailings were sampled and assayed as shown below. Samples taken from inside the workings at four separate spots are also documented.

The mine is located in an extremely sensitive historical area. Extreme care should be taken with portals, and all relics in the general vicinity.

Contact Vendor for a GRMP-43 report that details the geology of the Roosevelt mineral property.

Contact Vendor for a GRMP-43 report that details the history of the Roosevelt mineral property.

The mines primary export and value is gold with secondary copper.. This property in available for inhouse financing.