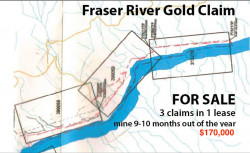 The lease combines three claims into one, an Upper, Middle, and Southern claim all of which are located along the East bank of the Fraser River in British Columbia (near Gang Ranch). This area is unique in that geology has created “benches” or potential deposit zones where gold can be found. A small area of these benches were originally mined by the local natives and Chinese between 1860 and 1930’s. It is amazing to see the length in which the Chinese mined this area. One can see that they only mined a limited zone and to a limited depth at a great amount of effort.

In a detailed geological report, based on a site observations of Upper Mine Site and tests performed in the early 1990, indicate that this ground has some real potential. The report breaks the site into three zone (Zones A, B, and C) of which the following volumes have been estimated: Zone A 44,000 m3, Zone B 192,000m3, Zone C 2,500,000m3. This just represents a portion of the mineable volume of Upper Claim, as stated in the report and additional zones D, E, F will require future bulk testing for future reserve potential.

Sample tests were done throughout the Upper Claim and a few in the Middle claim. A noticeable excavation of approximate 120m3 can be seen on site where approximately 8 troy oz of Gold was mined. One can extrapolate this to provide a possible estimate for the recoverable gold in Zone A.

Mining of Zone A, B, and C can potentially assist any future mining exploration of the Lease.

A copy of the Geological Report can be found in the link provided below.

Located within the Clinton Mining Division of British Columbia Canada, the Union Bar Placer Leases are located 93km North West from Clinton on the Fraser River and 3km South of the Churn Creek confluence. Directions: Drive North on HWY 97 , take the Meadow Lake Rd turn off (located between Clinton and 70 Mile House) heading towards Gang Ranch. Mine site is located on the East side of the Fraser River.

Union Bar Placer leases consists of three claims (for a combined area of 356 Acres) of which two of the claims are detailed in a Geological report - which is available for review. All three claims are located next to each other along the upper east banks of the Fraser River. The mining season can be 9-10months out of a year; however, the winter season is typically warmer in this zone and the potential mining season maybe extended. Typical gold from this are is flour gold mixed with a few smaller nuggets.

The following information can be found in the Google Drive link :
(copy and paste the link below to your web browser)