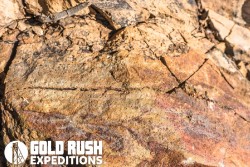 The Astrologer mining claim is located in what is known as the Golden Halo emanating from the famous Tyrone Mine. The concept being that from the massive copper deposit at the Tyrone, there are halos of minerals around the deposit, first in silver, then gold, then more base metals. Deposits in the “sweet spot” of the halo have reported more than 100 oz to the ton on a semi consistent basis (Osmer, Foster, Silver Dollar).

The Astrologer is a known and documented producer of Gold, Silver and Copper. The mine has been actively worked at least up into the late 1950s. The property is known locally as an untapped resource.

The Astrologer Gold mining claim covers two (2) shafts estimated at 120' and 100' respectively. These shafts reportedly have a good number of drifts exploring the veins. The upper shafts are cut on an outcrop and there is a large open stope (adit/decline) assumed to interconnect that is 100' below these shafts and accessed by a decline adit. The adit requires some clearing to be safely accessed. The shafts have recently been gated in box steel with concrete footings and access ports. The shafts were collared with concrete and once had headframes over them.

The Astrologer Gold Mine is located near the historic mine town of Silver City, New Mexico. Good 4WD roads lead directly to the claim and provide excellent access.

Located 26 miles outside of Silver City, New Mexico on a 4WD dirt road with on stream crossing.

The Astrologer mining claim is remarkably remote despite its close proximity to the town of Silver City. It is a well documented producer of gold and silver. Estimate last workings at the mine were in 1950-1960. Common for the southwestern states of Arizona and New Mexico is the abandonment of rich deposits purely for a lack of infrastructure and logistical support. Native gold was observed and noted in the waste dumps by onsite surveyors in 2016.

The mine is not a forgotten or overlooked commodity. It has been noted and addressed in various publications and is only overshadowed by the massive Tyrone Mine in close proximity. Many small miners have utilized some of the mines in the area as veritable “piggy-banks”, intermittently extracting high grade ores and selling small quantities as either bullion or for samples.

The Astrologer Mine was acquired by Gold & Silver Minerals, LLC (HBID-NYSE) in 2006. Gold & Silver Minerals, LLC stated that the reserves at the Astrologer Mine were worth at least $60,000,000 (sixty Million dollars) in gold and silver values. At that time, Gold was priced at $635 per ounce and Silver at 9.43 per ounce. The ratio of gold to silver was not disclosed, but regardless, the valuation would be more than the stated $60mil, conservatively estimated at $120mil. today. Unfortunately, the 43-101 reports that were made from the property have been lost to time and history. However there is documented evidence of their valuations available from Market articles and press releases on the internet.

From a 2006 article posted by Marketwire :

LAS VEGAS, NV -- (MARKET WIRE) -- August 7, 2006 -- Gold & Silver Minerals, LLC (PINKSHEETS: HBID), a Nevada corporation (the "Company"), today announced a definitive agreement to form a Joint Venture with Astrologer Mine, a wholly-owned subsidiary of H&S Mining, LLC, for the purpose of assessing and acquiring gold, silver and other precious metals on the existing property. The property is located near Silver City, New Mexico, a region well known for its abundance in precious metals and minerals.

The formation of the venture will combine the resources and contacts of both parties and turn the Company into a significant participant in the precious metals exploration and mining industry in the region. Charles Brown, President of Gold & Silver Minerals, LLC, stated, "This Joint Venture represents a tremendous opportunity for Gold & Silver Minerals to position itself quickly into a significant share of the rich mining interests in this region of the US. We are pleased to be associated with H&S Mining, which has made considerable progress and has already established a strong mining presence in the Silver City. In addition, through independent assays of the property, we have concluded potential in-ground core value reserves of $60,000,000 USD."

"We are pleased to enter into this Agreement with Gold & Silver Minerals," said Don Snodgrass, President of H&S Mining, LLC. "Our strategy with this Joint Venture is to leverage our properties and allow the parties to fully develop a diverse portfolio of high potential projects."

Under the terms of the agreement, the Company will issue one million shares of restricted stock at $3.00 per share to H&S Mining, and an additional 750,000 shares in six months. The final payment of 750,000 shares will be due on the anniversary date of closing, for a total of 2.5 million shares. Additional capital contributions by the Company of $600,000 will also be paid to the Joint Venture to purchase land and construct a mining mill to process product from the mine. The Company's purchase of 50% interests in the Astrologer Mine includes the rights to process metal ore at a minimum rate of 100 tons per day.

Surveyors assessed that there were other mine entrances on the claim at one point in time but they have been closed by means of backfilling. Solar pump functional and drawing water from the mine into a holding tank and into a trough, most likely from a local rancher. This will not impact the mining activity on the claim, and in fact may provide a small income from leasing the water to the local ranchers.

Contact Vendor for a GRMP-43 report that details the geology of the claim.

Contact Vendor for a GRMP-43 report that details the geology of the claim.

Reported reserves of at least $60,000,000 in gold and silver values in 2006. Located in the Golden Halo are just outside of the actively producing Tyrone Mine. For questions or more information please contact Jason Expeditions