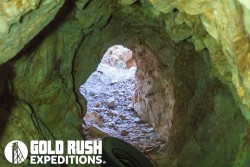 Maynard District – Mohave County, Arizona
You can walk into the open adits, would need to rappel down the shaft.
Easy 2WD road to access the claim.
Contact us for exact coordinates

Easy to access site with many great amenities. Previously operated as a commercial operation with 2 mills in its history. The mines have been worked exclusively for native gold and silver in quartz. Ores are very similar to the tellurides seen in Colorado and California, hence the historical mine name.

Documented with millions of dollars in gold "tellurides" blocked out through a series of drifts in reserves Power still runs directly to the site and is terminated at a fuse box.

The drifts are cut in stable and competent rock. Main mineral value at first glance appears to be gold and silver in quartz/tellurides in quartz. Surveyors estimate that main adit on the claim has been covered likely by local ranchers or past miners, not a BLM closure. Surveyors did not physically see water on the claim, however, the topo maps show a well. There are 2 large water tanks at the location of the well. The pumps may be functional or may take some work to be functional.

The historical accounts of this mine are centered around a main shaft. This shaft has been capped and will need to be re-opened for serious production work of consequence to be executed. The shaft is reported to have been capped by Phelps-Dodge in the mid to late 1960s according to a local rancher. Surveyors did define the locality of the main shaft. It would likely be an easy day's work to clear the shaft entrance and begin sampling and work in the lower drift levels.

In 1974, the mine was owned by Cerro Exploration and they reportedly had access to the shaft and crosscut workings. There is extensive documentation of the operation dating back as far as 1918 including Assays, a Mineral Examiners report, and a mapping of the workings, both exposed and covered.

This is not a novice or casual mining site. This site will require some capital to bring it up to a production state. There are millions in documented reserves of Gold, Silver, and Moly that can be extracted and may prove to be a very wise investment for a small to medium sized mining operation.

The country rock is mainly pre-Cambrian red granite, said to be intruded by porphyry dikes. The zone of mineralization in which most of the deposits occur lies on the northern and eastern slopes of the mountain. In this zone the deposits are contained in strong and persistent fissure veins similar to those in the Cerbat Mountains. The width of the ore ranges front 1 inch to 3 feet. It contains principally horn silver and is usually rich, especially so where the green horn silver (bromyrite?) is present. Some of the deposits also contain copper. Among the most important of the veins are those of the American Flag, Enterprise, Orem Eastern group, and Siamese group. They are mostly situated in alignment with the principal system of the Cerbat veins, agree with them instrike, and are probably contemporaneous with them in age and of the same general origin. The production of the district is reported to be fairly large.

Since the acquisition of the property by this Company all work has been confined to the sinking of a working shaft on the Garnier vein. This shaft was started on the outcrop of the Garnier vein and was sunk vertically to a depth of a little more than 200 feet where a station was cut, a crosscut bearing south 40 degrees west was started and continued to a point 365 feet from the shaft. During the sinking of the shaft a number of small veins & stringers were cut, all of which dipped to the west. At the 70 foot point the secondary sulphides were first encountered, assays as high as $70 in gold silver & copper being obtained. At the 110 foot point the first water was encountered and at about the same point the first molybdenite was found. At the 130 foot point it appeared that another vein was coming into the shaft from the east but as the sinking progressed the vein straightened, and the dip changing from the west to the east receding from the shaft into the country rock on the east of the shaft, indicating that the veins in the Garnier system might show a corresponding change of dip from the west to the east. At the west end of the station on the 200 ft. level a vein having a dip of 45 degrees to the east and a strike identical with that of the Garnier on the surface was encountered it is possible that the vein is the Garnier. This game vein was cut in the opening of the sump and at the point was two feet wide and was sampled across that width with results of $24.50 in gold and silver per ton.

In cutting a station for a pump in the west end of the station a small footwall stringer from the vein last mentioned was found which gave selected samples assaying 35% molybdenite. From the shaft to a point 150 feet to the west the granite is much broken altered locally by koalinization and sericitization and removal of a portion of the biotite. In this distance a number of minor slips having a north south strike were cut, three of which show a molybdenite content over a sufficient width to allow a profitable mining and milling.

At the 150 foot point a vein was cut and named the Bernice. This vein occurs along a north south fault plane in which the relative movement as evidenced by the displacement of a lamprophyric dike amounts to 30 feet. Where cut by crosscut, the Bernice was sampled across 4 feet with results of $23.22 in gold telluride. Drifting was done on this vein and at a point 12 feet from the crosscut it was sampled across four feet with returns of $41.28 per ton, while a selected sample taken from the 30 foot point gave a return of 20.2% molybdenite. The drift on the Bernice was carried to a point 48 feet from the crosscut and is still in ore, there being a considerable amount of high grade molybdenite for the last 20 feet along the drift.[1]

There is a unquestionable a large amount of both high grade and milling ore that can be developed on this and adjoining properties, but the only feasible method of mining it economically and profitably is by means of the proposed deep tunnel.[2]

Seven cars of ore were shipped from surface working assaying around $42.50 per ton in gold and silver, plus about 1% Wolframite and some Molybendite. These veins were not opened from shaft by cross-cuts, as all cross cuts from shaft were driven southwest away from the said surface veins. A 75-ft. Cross cut on 200-ft. level of shaft would cut the West vein.

Property has all the ear-marks of a mine that would supply a 100-ton mill for a number of years and I believe a great deal of money can be made in operating this property, providing the same can be adequately financed, equipped and managed. Mainly, it will be necessary to work out a process whereby all metallic values can be recovered in marketable form.[3]

Access to the Mine: You can walk into the open adits, would need to rappel down the shaft.
Tailings Present: 10,000-49,999 tons. Pyrites, Mica, Telluride, gold, silver, iron and quartz were seen throughout the tailings and ground.
Entrance: Solid Rock
Mine Cut: Adits and shafts
Depth / Length: over 6000' not all accessible.
Minerals in the Mine :Historically mined for Telluride ores. Veins of gold and silver tellurides noted in stoping in lower adit.
Foot Traffic in the Mine: None
Last Worked: 1981