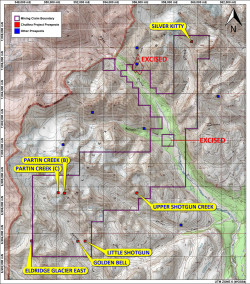 Multiple high-grade exploration prospects for gold-silver, tin and other base metals within hard rock and placer type deposits. Geologists appointed by the US Bureau of Mines (C. C. Hawley and Associates, 1978) defined non-JORC / non-NI 43-101 inferred resource potential at the Partin Creek prospect:

The Chulitna Project is located within 7 mi (11 km) from the Alaska-3 (AK-3) major highway (Anchorage-Fairbanks) to the north of the Talkeetna township village. Excellent nearby infrastructure adjacent to the highway including State owned Alaska rail-road and grid connected power.

The tenure is comprised of 16,800 acres (~68 km2) unpatented State of Alaska mining claims (does not fall under Federal BLM mining jurisdiction).

The southern part of the Chulitna district, including Ohio Creek, Partin Creek, and their main tributaries, is locally strongly mineralized. Upper Ohio Creek and the Coal Creek areas could be significant tin-silver areas; Partin Creek has one outcropping ore zone with high gold values.

Geologists from the U.S. Bureau of Mines has conducted geological reconnaissance over the Chulitna Project where sample assays contain up to 63 g/t gold (>2 oz/t Au), 21.9 oz/t silver, 1.74% copper, 1.08% zinc, 0.79% lead, and up to 13.9% antinomy. A non-JORC compliant inferred resource has been estimated by geologists contracted by the U.S. Bureau of Mines (C. C. Hawley and Associates, 1978) at two locations on the Partin Creek lode prospect, as follows:

There is potential for delineating multi-million ounce gold and silver resources and development of placer gold and tin alluvial prospects to generate income streams.

The Chulitna region is located along Alaska's major rail-belt approximately 210 km to the north of Anchorage and hosts the Golden Zone deposit as well as numerous prospects with intriguing values of precious and base metals.

The Chulitna area is comprised of several northeast trending belts of rocks of upper Paleozoic to Cretaceous age (herein referred to as the "older assemblage") bounded to both the northwest and southeast by Jurassic to Cretaceous flysch of the Kahiltna assemblage (Reed and Nelson, 1980). Both the Kahiltna and older assemblages are sandwiched between Wrangellia terrane (Jones and others, 1981) to the south and the Denali fault and North America craton or Yukon-Tanana terrane to the north. Published literature describes much of the Chulitna region as allochthonous terranes most likely accreted to Wrangellia and rafted north to collide with North America in the Late Cretaceous (Csejtey and others, 1992). Based on our mapping and petrology, we suggest instead that Chulitna may be part of Wrangellia and can be correlated with upper Paleozoic to Mesozoic rocks of the east-central Alaska Range and western Yukon Territory, with a complex Cretaceous and younger structural history accompanied by two major intrusive episodes.

The dominant structures in the Chulitna district are high-angle faults, as indicated by linear patterns of shallow earthquake epicenters. Early workers (for example, Hawley and Clark, 1974) mapped these as high-angle faults because their nearly straight-line surface traces show no deflection by the greater than 2 km topographic relief. Subsequent workers (Jones and others, 1980; Csejtey and others, 1992) mapped these as [moderate-to high-angle] thrust faults to accommodate their geologic model of terrane collision. However, these faults, which can be traced both on the ground and by linear zones of high conductivity, show abrupt breaks on aeromagnetic maps, indicating they are very steeply dipping.

In an effort to better understand the geology and many known mineral deposits of this area along Alaska's main transportation corridor, a study was initiated by the Alaska Division of Geological & Geophysical Surveys (DGGS) in 1996 with a 364 mi2 airborne aeromagnetic and electromagnetic survey (magnetic and resistivity) (DGGS and others, 1997a,b,c,d; Burns, 1997). In 1997, a two year geologic mapping effort began as follow-up to the airborne geophysical surveys. Because many of the bedrock units in the region have distinctive geophysical signatures, the airborne surveys proved to be extremely useful mapping tools to delineate both map units and structure, particularly in areas of extensive surficial cover. The Bureau spent a total of six weeks in the field between 1997 and 1998.

The geologic setting of the southern part of the Chulitna district is very similar to that of the northern-Permian-Triassic rocks faulted against mid-late Mesozoic rocks on the east, and succeeded westward by Triassic, Jurassic, and Cretaceous and possibly Tertiary (Cantwell Formation) rocks. It differs in an unusual unit of basalt, mafic volcanic breccia, and interstratified limestone which overlies the red-bed limestone sequence of Permian-Triassic age and underlies the Mesozoic graywacke-argillite. The mafic volcanic limestone unit is important as the host of mineral deposits in Partin Creek and in Canyon Creek, part of the Ohio Creek area. Ultramafics tentatively considered to be ophiolitic are abundant along the eastern part of the belt.

Except for the granitic stock in upper Ohio Creek, and the cluster of intrusives near Coal Creek, intrusives are less abundant than in the northern part of the Chulitna district.

Types of mineral deposits include:

Greisen and tourmalinized zones locally occur in granitic intrusives. Copper and locally native silver is disseminated in the basaltic volcanics.

The only recorded metal production from the Chulitna district is from the Golden Zone deposit. Between 1941 and 1942 it produced 1,581 oz Au, 8,617 oz Ag, 21 tons Cu, and 1.5 tons Pb. A small amount of placer gold was mined from Bryn Mawr Creek, immediately downstream from the Golden Zone, and from McCallie Creek, in the western part of the quadrangle. Field descriptions and assay data for major prospects are given in Hawley and Clark (1974), Kurtak and others (1992), and Gage and others (1998). Stratiform, syngenetic diagenetic deposits appear to be rare or non-existent in the Chulitna district.

The Golden Zone property owned by Avidian Gold (CVE.AVG) and resource is located adjacent to the north of the Chulitna project, now in a land-lock area on that northern side of our claims (Avidian staked a significant amount of claims after the results of 2018 drilling on new prospects).

Information Memorandum is available to interested parties and with due-diligence data and references. Project is wholly owned by an Australian private company via its wholly owned Alaskan subsidiary (LLC). We are open for project sale, JV or listed company merger. The Company also owns the Monte Cristo project on this site also located in Alaska.