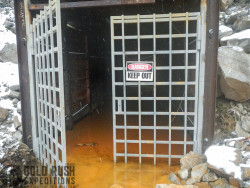 The Elkhorn Mineral property consists of one hundred and eighty acres of lode mining claims and a 5 acre mill site. The claims encompass all of the historical workings of the Elkhorn Mine and also the Park Mine which is noted as being interconnected and also located on the Idahna lode.

The general geology and layout of the Elkhorn property follows the mapped Idahna and Park lode ore bodies and encompasses the apexes of same as understood by current geological descriptions.

The Elkhorn is possibly the largest, and most important mine in North America and contains millions in documented, blocked reserves of gold, silver and copper. There is also molybdenum and platinum that have been noted. The current blocked reserves represent only a small portion of the inferred reserves which are calculated to be worth billions of dollars in silver and gold. The production of copper and molybdenum is not calculated but will also bring substantial income.

Located on high clearance 4WD roads. Outside of Polaris, Montana

Blocked Reserves in the Elkhorn Mine are defined by a culmination of the measurements done by Coin Canyon Mining in 1969, Boldex in 1974, Don L. Jenkins in 1980 and Boston/Montana prior to 1950. The sizing of the blocked reserves is noted as 459,600 tons with a valuation of .15 oz/T AU and 6 oz/T AG.

There are blocked reserves in the Elkhorn Mine noted as 459,600 tons. These are measured, drilled and blocked. There is at least 4x this amount in inferred reserves.

Contact Vendor for a GRMP-43 report that details the geology of the Elkhorn Mining Claim.

Contact Vendor for a GRMP-43 report that details the history of the Elkhorn Mining Claim.