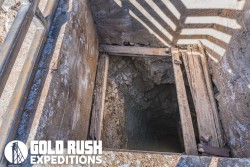 Burro Mountain Mining District – Grant County, New Mexico
You can drive directly up to mine entrances.
Contact us for exact coordinates.

The Astrologer Gold mine is a well documented producer of gold and silver. Native gold was observed and noted in the waste dumps by onsite surveyors in 2016.

The Astrologer Gold Mine claim covers 2 large shafts estimated at 120' and 100' respectively. These shafts reportedly have a good number of drifts exploring the veins. The upper shafts are cut on an outcrop and there is a large open stope assumed to interconnect that is 100' below these shafts and accessed by a decline adit. The shafts have recently been gated with wide access ports. The shafts were collared with concrete and once had headframes over them.

The Astrologer Gold Mine is located near the historic mine town of Silver City, New Mexico. Good 4WD roads lead directly to the claim and provide excellent access. Surveyors assessed that there were other mine entrances on the claim at one point in time but they have been bulldozed. Solar pump functional and drawing water from the mine into a holding tank and into a trough, most likely from a local rancher. This will not impact the mining activity on the claim.

This is a good property for a small mining operation. A Notice of Operation will be required to access the shafts and sample the workings. The claim could also be worked without notice by addressing the waste dumps for gold. To make a decent return from the operation it is recommended that the shafts be sampled and high graded.

Gold Rush Expeditions, Inc can provide assistance with Notice of Operations and submissions if needed.

The Burro Mountains and the adjacent region to the south and west are subdivided into five geologic provinces by two, and probably three, major northwest-trending faults: the Mangas, the Malone, and a fault 2 miles northeast of the Malone fault. (See fig. 30.) Northeast of the Mangas fault the Little Burro Mountains consist of a complex of pre-Cambrian granite, late Cretaceous or early Tertiary monzonitic intrusions, Tertiary volcanic rocks, and Cretaceous sedimentary rocks (Paige, 1916). Southwest of the Mangas fault is the Mangas Valley, which consists of Gila conglomerate of Pliocene and Pleistocene age and more recent sands and gravels. Southwest of the Mangas Valley pre-Cambrian granite constitutes most of the Big Burro Mountains, but it is intruded by the quartz monzonite Tyrone stock and" by dikes of diverse composition. On the southwest side Of the Big Burro Mountains a graben valley occurs between the Malone fault and the fault 2 miles to the northeast. This graben contains Tertiary volcanic rocks overlain by Gila conglomerate, both units dipping steeply northeast. Southwest of the Malone fault pre-Cambrian granite and included schists and quartzites are present. Quaternary sands and gravels and possibly Gila conglomerate occupy the basins south and southeast of the Burro Mountains.[1]

The Astrologer Gold mine, in the SW¼ sec. 20, T. 19 S., R. 16 W., on the west side of the Big Burro Mountains, is owned by Charles Ray, Lordsburg. The mine has been in­active for many years but at one time was worked for silver, gold, and lead. Two vertical shafts on separate veins explore the deposit. Six drifts, none exceeding 75 feet, extend from the shafts.

The ore concentrations occur in several subparallel quartz veins which cut Burro Mountain granite. The veins are almost vertical and strike northeasterly. Short andesite and more continuous rhyolite dikes also trend northeast. Numerous aplite and pegmatite dikes intrude the granite in the vicinity. A prominent rhyolite dike, which can be followed for more than four miles, trends northwestward 1000 feet west of the mine. Minerals identified on the dump include chalcopyrite, pyrite, galena, chalcocite, and quartz.

Two small lead-silver prospects lie northwest of the Astrologer Gold mine. Neither has been active in recent years. Both have been explored only by shallow pits. The Live Oak prospect, owned by N. P. Grenfell and H. R. Eaton, Silver City, is in the NE¼ sec. 19, about 3000 feet northwest of the Astrologer Gold mine. Two 15- to 20-foot-deep shafts expose a northwest trending vertical quartz vein about one foot thick cutting the Burro Mountain granite. Pods and granular masses of galena, sphalerite, py­rite, and quartz less than four inches long occur within the vein. Pol­ished-section studies of the ore by Hewitt showed that the sphalerite was deposited in small cavities lined by quartz druses and contains tiny blebs of random- or parallel-oriented chalcopyrite.

A similar vein lies about midway between the Live Oak and the Astrologer Gold Mine. It is exposed in a shallow trench.[1]

The main portals of the Astrologer gold mine are still open and have open gates built around them. This is a boom to the claim owner as the work to secure the shafts is already complete and provides a good starting point for operations. There are two small adits that have been bulldozed on the northern end of the claim. Gold is going to be the main export, it is free-milling and only requires crushing to separate the gold from the other minerals. Also noted on site were Chalcopyrites, pyrite, galena and copper. Decline stope on the claim is loose and requires caution. It should be cleaned out before working commercially.

Number of Mines: 2 shafts, 1 incline, prospects.
Nearest city with amenities: Silver City, New Mexico 16 miles away
Access to the Claim: You can drive directly up to mine entrances.
Parking and Staging on the claim: Ample parking and staging on the claim. Could park 10-15 vehicles on claim.
Resources: Solar and water.
Structures on claim: Headframe remains, solar panel, water tank.
Relics on the claim: None
Elevation: 6445'