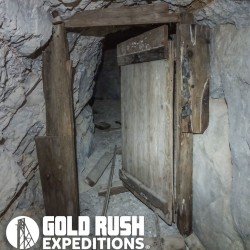 The Cuba is a very remote and unmolested gold mining site. Positioned in the southern end of the Egan Range, just north of Ely. The mine is tucked into a high mountain valley at 7500ft. The mine is rich with Silver, large, blocked reserves of it. Of more interest were some sections of the ore bodies where we found free milling gold.

However, this should be viewed primarily as a high value, high grade silver mine. There are a number of drifts following the high grade sections of the lode, with some large open stopes exposing ore bodies containing gold and silver deposits.

The location is stunning, however, underground is more impressive when documenting silver deposits that were left as "not rich enough". Consider that when this mine was being worked, silver was an average of .50 (cents) per ounce. Today it hovers around $16.00 (dollars) and is in a severe shortage. Even the US Mint has slowed production of Silver Eagle coins due to shortages.

The Cuba mining claim is located on the Egan Range, 32 miles north of Ely, NV. This is a historic site and noted on most old maps, and talked about in many of the historical documents that refer to the district and surrounding area.
The Cuba is, bar none, one of the largest mines in the district and the largest producer. The silver is still rich and what was left as mid to low grade yesterday is extreme high grade today.
The pavement ends about 13 miles from the claim site, but the dirt roads we smooth and in excellent repair. This is likely a result of the mine being optioned well into the 1960s. The roads can be accessed by most any 2wd vehicle, but we do recommend a high clearance 4wd for the winter months as the claim sits at about 7500’ of elevation and inclement weather can change conditions quickly.

An expansive amount of room for vehicles and staging equipment. A cursory look into the bushes shows thousands of old cans, bottles, and various miners trash. There were a lot of people here, working a lot of ores but they are all gone now.
We didn’t find any fresh water on the site, but noted a spring down by the main trail.
This site is recommended for small to mid-sized mining companies. The silver values are very high, but will require processing off-site. The gold will need to be separated from the silver which will be expensive. This work will need to be done in bulk amounts to make the operation profitable. This mine will not operate at any profit without processing substantial amounts of ores.

This part of the Egan Range is composed of yellow and red weathering quartzites, exposed at the east base of the mountains, overlain by green and red shales, above which lie massive light-gray compact limestones which form all the higher mountains. In the northern part of the district, at Water Canyon, the sedimentary rocks are intruded by a large stock of granite that varies from equigranular to porphyritic in texture. In other places in the district there are small dikes and masses of granite porphyry.[2]

The Cuba fissure, about 2 miles west of Steptoe post office, strikes N. 40°-43° E. and dips 40°-65° SE., cutting across the bedding of light and dark colored dense limestones in beds 2 to 4 feet thick that strike N. 20° E. and dip 30° W. The fissure has been opened by a number of short tunnels and open cuts for about 8 miles through a vertical distance of 500 feet. In most places the fissure is filled with large crystals of white calcite or brownish iron-bearing calcite and in places shows drusy openings. In this gangue there are scattered, irregular bodies of galena. The largest body of ore was mined from a tunnel at a barometric elevation of 8,100 feet, on the north side of the hill across which the fissure runs. This body, averaging about 2 feet wide, was 75 feet long on the drift and about 25 feet high on the dip of the vein and pitched northeast in the fissure. At both ends of the ore shoot the barren calcite filling of the fissure continues. About one-half mile south of this body, in the bottom of a gulch, at a barometric elevation of 7,600 feet, tunnels on the fissure open some smaller bodies of ore. There is very little oxidation on this vein. Nearly pure galena outcrops all along its strike, but occasionally small amounts of anglesite and cerusite are seen as thin crusts coating the galena directly at the surface. The sorted galena is said to carry about 2.75 ounces of silver a ton.[1]

The Cuba I mine begins as an adit that immediately starts snaking through large, open sections of stoping. Soon you start to come upon a myriad collection of drifts that appear to be chasing smaller veins. However, most all of them seem to drift to the main lode. There is a separate, large vein that's located 200 feet below the main galena lode. It is composed of gold and quartz with only a small showing of galena.
The entrance of the mine sits on the rock face of the mountain and is naturally camouflaged. There are an estimated 30k tons of high-grade silver ore set near the entrance of the mine. These could be shipped in their current state.
Inside the portal, the drift is open and clean. 30' inside a large stope expands on a body of silver ores. The stope is estimated at 1100 sq.ft.

Old carbide markings show that likely 23 cars were loaded and pulled out of the mine from this section of stoping alone.
Deeper into the workings there is another large stope with a crosscut drift. These drifts chase a vein of quartz and galena on either side.
There is existing rail farther into the workings. Total workings in this mine are 150 linear feet and over 8000 square feet in stoping.

The Cuba II mine is not the largest of the 3, but possibly the most entertaining. Another well cut adit with an easily visible entrance and stable drifting.
The silver is very high grade in the galena. Surveyors found two small deposits of gold inside some small stopes cut into quartz.
"About 120 feet into the mine we came upon an old wooden door. This door marked the beginning of a set of tracks that lead under the door and continued into the darkness of the mine. We continued through the door, examining the massive silver lode that is being chased by the cut. As we made our way further into the mine we soon discovered that the workings in the entrance of the mine, those before the door, were the low grade workings. The richest deposits were guarded by that portal, probably well locked and guarded at one time. Stopes began to form high ceilings in drifts. Huge rooms where tons of ore had been cut an mucked still showed rich silver and some small gold deposits. There is an extensive collection of small winzes, wandering up and down, starting drifts and opening into stopes.
This series of workings lead back another 100 feet through the hard rock, deep into the earth. As we worked farther back we started finding more gold than silver. The galena lode faded as they tunnels went deeper. There is a defined area where you can tell you drop into another ore body. Its all white quartz, gold and some iron."

The main portal of the Cuba still shows evidence of substantial reserves of both gold and silver. Well over 800 linear feet of workings with many thousands of square feet in stoping and exploratory drifts.
A hard rock portal that is stable and very competent. Water lines are still in place and likely remnants from the last work in the 1930s.
Wide quartz bodies are as wide as 8' in some sections.
There is a large stope 100 feet in. A huge 165 foot cut upward at a 45° angle. The stope opens and gets larger as it goes along. Indicating the ore body was getting richer. The incline would make it very easy to dump out ores and muck. The silver and gold ore is sporadic and has been extracted from much of the stoping. Near the top of the stope there is good gold and silver ore in quartz. This likely noted reserves.
We noted more of the rich galena as the stope gets larger and larger. The gold deposits on the quartz have mostly been worked around. Evidence of commercial mining, the miners would be directed at a specific type of ore. Ores that the processing plants were set up to accept. Other deposits were often noted, and marked as "reserves".

The primary drift leads back a total of 375 feet, snaking past small stopes, high grade "honey holes" and one other large 60 foot stope along the way. Near the end of the drift, there is a side drift which may have been a lunch spot for the miners. All along the walls are markings of miners and prospectors who worked or surveyed the mine. Dating ranges from 1851 to 1938.
Running another 100 feet on the side drift before another cross cut. To the left is a 70 foot drift, this drift follows white quartz with galena. Samples broken out show a complex mixture of quartz with yellow, red and gray splashes of color.
The drift to the right runs 215' in similar white quartz. There was no indicator of gold until the last 50-60' where it began to show as small stringers and nuggets in the quartz. There are various small drifts working into large stopes along the drift. One stope so large that lights cannot discern the back of the stope. At the face, there is good quartz with visible gold. Old carbide writings indicate that the mining company had decided to wait for more favorable market conditions.

Surveyors took samples from this section totaling 11lbs and recovered over 1.5 ounces of free gold by crushing and panning.

Last but not least was a short 25 foot cut. This chased back on the quartz, but the quartz ends after about 20 feet.
We found a lot of debris at the intersection of the drifts. Water barrels, carbide fire barrels, timber, railing, pipe, a large tank and large muck plate, well used.