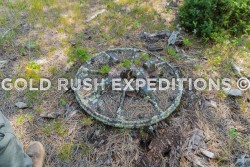 The Empire Mineral Property is a grouping of three (3), twenty(20) acre mining claims. These claims Covering a contiguous 60 acres and all of the mines, prospects and workings of the Historic Empire Gold Mine in the Black Hills Mining District of Pennington, South Dakota. The claims cover the Forrest City Mine, the Golden Slipper and the Empire Mines.

Empire Mines held these same mines with over 900 acres of claims in 1940, however the primary workings are contained in the claims filed by Gold Rush Expeditions, Inc. The Golden Slipper and Forrest City mines are documented as interconnected at the 550’ level. The mines were located as early as 1893 and produced good amounts of free gold from their inception until 1934. Empire Gold Mining Company purchased the Golden Slipper and the Forrest City Mines in 1934 and combined the two mines under their moniker. From 1935 to 1941 the mines were known as the Empire Mines.

The mines produced substantial gold values and were in fact on an upswing in development in 1940 when the mines were shut down due to the War Act. The company dissolved during the war and the mines were held by some small companies until 1980 when they were re-surveyed with the surgence in gold prices. Homestake Mining held control until the early 1990s but did no development or even exploratory work.

The mines were abandoned sometime in the early 2000s and have remained so ever since. The mines are remote, and not easily accessible. There are an impressive amount of workings as documented in 1938, which have not been examined since 1940 when the mine was abandoned.

The mines match up with all historical accountings, however, they will require investment into clearing the declines and rehabilitating the workings. and were all worked by the Empire Mining Company.

Located outside of Hill City in Pennington County, South Dakota

Easy 2WD dirt road to begin. Road is very old and only sees light jeep traffic. The road gets a little more challenging and requires 4WD from the mill site to the mines. The last half mile to the mines is blocked by a tree fall that should be cleared to restore access to the mines.

The property encompasses 60 acres roughly 5 miles from Hill City, South Dakota. There is good road access to the claim area with high clearance 4WD. A tree fall off the main trail has obscured the original road to the mine. This tree could be removed and easy 4WD access to the mine portals would be restored. The property is remote and sees nearly no traffic. The claims have not been worked in any earnest effort since 1940 despite gold ore values averaging 4 OPT AU in free gold.

Contact Gold Rush Expeditions for a copy of our GRMP43 Technical Report and more information.