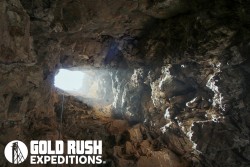 Cienega District – La Paz County, Arizona
There are 2 separate entrances to this mine, both cut from the solid bedrock of the small hillside.
The entrances to the mines can be seen from the road leading to them.
Contact us for exact coordinates

The historic New Standard mining claim is located 17 miles east of Parker, AZ. It is located in the Cienega Mining District which is reported to have produced over 11,000 ounces of gold prior to 1941[3] The mines in the area produce native gold in quartz in pocket deposits. The mines are also known for copper deposits in the form of azurite and malachite and deep, wide veins of deep blue copper. The New Standard is a collection of adits, shafts and drifting estimated at over 4000'. There are two accessible shafts in the heart of the mining area. These are assumed to be the last remaining of the 5 (five) that were reported in 1921. The shafts have been reported to be as deep as 365'(three hundred and sixty five feet) with drifting on multiple levels. The mine site is large and two lode claims were needed to address the mines and the mill site. This gives a total of 40 acres of mineral rights.

Access to the mine is through a wash road that is a direct route but can be deep and challenging. High clearance 4WD is recommended. There are multiple concrete pads on the claim, a remnant of the old mining days. These are excellent for staging and parking of vehicles and or equipment.

The New Standard is a large claim site and is suitable for a small to mid sized mining operation. The underground workings will need rehabilitation, which is a simple task and can be addressed by the owner or a contracted out to a mining development company. A report from 1965 states that the gold was found in waste dumps at the New Standard and Little Golden prospect areas. These mines are both contained within the two mineral claims.

A large mining district, the Cienega, lies within the Buckskins, and is described as a Cu-Au-Ag-Pb-Hg-W-Ba mining area. The major target was (and is?) copper; however, significant amounts of gold and silver have been produced in past years. These deposits have produced, in total, about 52 million pounds of copper 15,500 ounces of gold, and a few hundred ounces of silver.

Mineral deposits are widely distributed in the Cienega District and most occur along, or within a few feet, of the detachment fault, or along the other numerous small scale normal faults. The area has mines located in basalt, in vuggy, almost cave-like limestone (partially metamorphosed), along breccias zones in various units, along massive quartz veins, and in metamorphosed crystalline rocks. Interesting minerals include crystalline calcite, barite, chrysocolla, and specular hematite. [1]

The Standard Copper Company acquired this property in January of 1917. The prior owners invested $100,000 through the development of five shafts. After it was bought, the Standard Copper Company invested $35,000 in exploratory drilling. By 1919 the property had shafts that ranged from 10' to 100', and was further developed in 1921 where the shafts ranged from 10' to 365'.

Mining engineer E. J. Costello made this statement in 1919.

I think there is a good chance to find large deposits of secondary enrichment, as the conditions are favorable, the ground, due to extreme fracturing, has carbonates of copper in most all fractures and cavities, but the porphyritic schists being almost thoroughly leaches, the values would in that case be carried down with the water and reprecipitated, as the natural solvents are in the field and would grow progressively richer with the continuation of the process. Those I believe to be the conditions of this property.

In 1919, from an average of eighteen assays there showed to be 7.90% copper. From the 13 assays that showed gold, the samples averaged to a value of 62 cents.

"Samples collected in the New Standard mine and Little Golden prospect areas (fig. 5, area 6) have anomalous concentrations of gold, cobalt, copper, and iron, and slightly anomalous concentrations of silver, barium, bismuth, molybdenum, lead, antimony, and tungsten. Gold was detected in five rock samples (two at 10 ppb, one at 100 ppb, and two at 200 ppb) from this area."[2]

"A common suite of elements found in anomalous concentrations is evident in analyses of stream-sediment, HMC, and rock samples from around the Pride, Mammon, and New Standard mines, the Little Golden prospect, and prospects near Squaw Peak. Anomalies are relatively strong for copper and iron, relatively weak for silver, barium, bismuth, molybdenum, lead, and tungsten, and variable for gold, arsenic, cobalt, manganese, antimony, and zinc. "[2]

There are quite a few concrete pads on the claim that are in very good condition. These make excellent foundations for 5th Wheel Campers and vehicles. The area is accessed via a wash road that is very sandy and should not be attempted without 4 wheel drive. The mill site is interesting in its lay out. It shows to have some amalgam process but also shows the remains of at least 2 shaker tables which are only used in the processing of gold. The mine is noted as a primarily copper producer. The gold was noted to be minimal but the presence of the shaker tables may indicate there is gold of some value and in a native, or free milling form. There are at least 4 small mines on the hills north of the New Standard site which should be considered as a part of the New Standard but were not surveyed due to time constraints. There are two main portals into the lower workings of the New Standard. The two portals lead to the same area so it is logical to choose the drift that is clear. The other drift is stacked with old ladders and timber, apparently being staged for some purpose. Waste dumps are much more substantial than previously reported. Based on surveyor observations, there is roughly 30-35,000 tons of waste dump. There is an additional 400-500 tons of processed tailings near the mill that show oxidized silver and copper. There were no high grade piles above ground but ores below ground showed gold and copper in quartz with some heavy but inconsistent silver deposits.

Access to the Mine: There are 2 separate entrances to this mine, both cut from the solid bedrock of the small hillside.
Tailings Present: 1000 yards. Gold, Iron, Copper, Chrysocolla
Entrance: Easily accessible and stable. No supports or collar.
Mine Cut: Shaft
Depth / Length: 250 + feet
Minerals in the Mine: Gold, Iron, Copper, Chrysocolla
Foot Traffic in the Mine: None
Last Worked: 1965