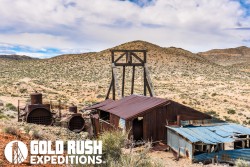 Cloverdale/Republic District – Nye County, Nevada
You can drive directly to the mine openings.
High Clearance 2WD will be suitable in dry conditions to access the claim. The claim is about 2 miles off a main wide 2WD dirt road.
Contact us for exact coordinates.

The Orizaba Mine site covers all of the workings, trench, and sample areas of the historical operation. The Orizaba Mine is documented to have produced native gold and silver in abundance. An assay reported over 40 ounces of silver and 1/2 ounce of gold in a grab sample. The mine is a large beast with over 2500' documented feet of drifting in 1913. Surveyors estimate closer to 4000' based on the waste dumps.

The Orizaba Mine suffered from a common problem of the day which has been easily remedied today, that is water. Where pumps and machinery struggled to remove 1000 gallons per hour prior to 1960. In the 1960s when pump technology made great improvements and made it possible to pump 100,000 gallons per hour with a portable pump for a reasonable price, but the Orizaba has not been mined since the 1930s. It is possible that with some degree of engineering the remaining equipment at the hoist house could be made to run again.

The Orizaba Mine is recommended for small cap miners looking to develop a mine for profitable ores or resale or lease to larger mining operations. The definition of the ore body will need to be addressed which will require drilling and sampling. Once the extent of the ore and the ore body has been clearly mapped and defined, the mine will need to be re-evaluated for value. The mine will also need to be fully mapped and ore bodies defined as they intersect the stopes and drifts in the workings. Pumping will likely be a major element of any operation which will require a Notice of Operation. This is a subsurface mining operation. All work will be done underground and hoists and other such machinery will be needed to haul both man and ore up and down the shafts. This will also require a plan of operations and likely a reasonable bond.

The oldest rocks exposed in the Republic district are calcareous and dolomitic siltstone, sandstone, and conglomerate of the Late Triassic Luning Formation. These units are folded into a major east-striking syncline and are mildly to intensely deformed. Contact metasomatization has locally bleached the formations, and hornfels has formed in some areas. Highly deformed Tertiary volcanic rocks overlie the Luning and are composed chiefly of altered and sheared welded tuff. These older rocks are overlain by relatively undeformed volcanic flows of intermediate composition which are in turn overlain by gently dipping tuffaceous sedimentary strata, andesitic lavas, and younger andesitic and basaltic rocks. Near the Blue Gem Mine in the southern part of the district, deformed metachert, quartzite, and greenstone, assigned to the Permian Pablo Formation, crop out.[1]

A short, but unverified history from Ghost Towns and Mining Camps of Nye County, Nevada, related the following:

Ed Workman, who later discovered National, came acros gold and silver ore in the western part of the Cloverdale District in 1909. He was soon shipping ore from the Orizaba mine to the town of Millers, in Esmeralda County. The property came under the control of the Diamondfield Black Butte Reorganized Mining Company based in Goldfield. The company was incorporated in 1905 and then reincorporated in 1910 with 2 million dollars in capital. The Diamondfield Company sold its claims to the Orizaba Mining and Development company but maintained a financial interest in the new company which was incorporated in 1915 with $1 million in capital.

In 1911 prospectors stake six claims covering 120 acres, the ore contained quantities of gold, silver, lead and copper. By October 1915 miners had uncovered over 1500 tons of rich ore in the Orizaba mine and processed another 1200 tons of lower grade ore in the tailings piles. During the next two years the Mines Selections Company gained control over all of the stock and assets of the Orizaba Company and became the property new owners. In 1917 the company moved mining equipment from the Golden to improve the Orizaba mine. Orizabas main disadvantage was the fact that 100,000 gallons of water were seeping into the mine every day.

From 1913-1918 the mine produced ore valued at $122,000. In May of 1922, the Silver Mines Selection company, which was unrelated to the mines selection company, purchased all the holdings at Orizaba and began removing water from the mine. The Orizaba is documented to have produced over $128,000 in silver, which was only worth sixty cents an ounce at the peak of the mine activity."

A USGS surveyor breezed through the Republic District in 1986, he made a short, incomplete reports that stated the following:

In 1913 the mine was owned by the Tonopah Banking Corporation and was being worked under lease. At that time, a sample assayed for $8 for gold and $41.16 for silver.[3]

A report on the Orizaba from that time reported:

This Property (the Orizaba) is located about a mile east from Republic and is developed to a depth of about 100 feet. Considerable drifting and stoping have been done on the upper level and some high grade shipments are said to have been made. All of the work to date has been above the water level by the present leasers are preparing to sink and develop the sulphide ore. My grab sample of this sulphide ore gave assay returns as follows: Gold: $8; Silver $41.16; Total:$49.16 per ounce.

The vein occurs along the contact of a light-colored limestone and granite. Near the contact this granite resembles diorite.

The Orizaba Mine is the property of the Tonopah Banking Corporation. It is being worked at present under a lease and bond given for two years.

Work below the water level in the Orizaba may develop some good ore. The vein varies from two to five feet above the water level. If this width is maintained in depth and the sulphides continue to have the value determined above, this property will be worth further investigation. A winze is to be sunk to the point where the above sulphide sample was taken.[3]

Vein appears to have been intercepted running North/South with a trend crossing east and west as evidenced by exploratory trenching and drilling.

Major workings are in the center of the claim, a large shaft with surrounding shafts and extensive trench work. Underground workings are largely unexplored but are reported as extensive on the 100' level. Other work was being done in the 1930s on dewatering and accessing oxidized ore bodies. No further information available on these workings.
Gold is said to appear in native form and averages 1/2 ounce per ton. Silver averages 40 ounces to the ton.

Samples were taken from the main camp and the smaller shafts in the western camp. Noted good lead and silver content in dark ores. Gold was seen in very few waste dump samples. Further expenditure is warranted to document the underground workings and define the veins which have been worked.

Massive rail seen at the head of the shafts and around the workings. These rails would indicate large, commercial cars being used, 5 tons or more. This information gives a good insight into the actual production of the mine and what has and has not been worked.

Looks very promising and there are many metal-rich samples that do not have clearly identifiable ores. Infrastructure is large and indicative of the level of return of these operations. 18,000 tons of reserves were reportedly left in the mine in 1929 when the mine was mothballed. Recommend full core sampling and drill program which has never been completed on the property.