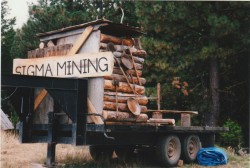 20 Lode Mining and One Mill Site Claims near the end of the Oregon Trail
All required government filings current;
Approved and completed mine tunnels, plans, and access routes;
Reserve estimates from 240,000 to 366,000 ounces of gold;
Adequate water supply and paved state road nearby.
New power lines within five miles and temperate climate with ability to operate year-round next to major city only seven miles away.
Seller as NO debt and no underlying royalty or net smelter agreements. A buyer's cash flow is FREE CASH FLOW!

Located approximately six miles south of Unity, Oregon in the Wallowa-Whitman National Forest on the north slopes of Bullrun Mountain, between Shirts and Jobs Creeks. Elevations vary from 5500 ft. to approximately 6200 ft. above sea level. The area has been famous as a high-grade underground gold producing region for decades. Baker County, Ore. was the center of the Eastern Oregon gold rush in the 1860s, and values from 25 to 70 ounces of gold per ton in the immediate region are common. This mountainous region experiences dry summers and wet winters with most of the precipitation in the form of snow, accumulating 12 – 24 inches per annum. Temperatures range from near freezing in winter to 80F in the summer. Pine, fir, tamarack and mountain mahogany trees partially cover the hillside with sage brush and bunch grasses dominating the lower elevations along the foothills. A nearby spring provides adequate domestic water. Water necessary for mining and milling operations is provided by the nearby and abundant creeks.

The potential output of the Grandview mine is truly astounding. 20 Lode Mining and One Mill Site claims near the end of the Oregon Trail with all permits and required government filings current. Approved and completed mine tunnels, plans and access routes. Adequate water supply and paved state road nearby. New power lines within five miles and temperate climate with ability to operate year-round next to a major city only seven away.

Various studies commissioned by the current owners over the course of many years have concluded that Grandview Mine has the potential to be a HIGHLY profitable precious metal mining operation. All permits are in place with recovery problems resolved and both reclamation and exploration completed. Seller has NO debt and no underlying royalty or net smelter agreements. An owner's cash flow is FREE CASH FLOW!

In another geological survey performed by John J. Oberling in December, 1995, random samples evidenced gold values to vary from .1 oz to over 70 oz. per ton. Mr. Oberling stated in his report that this estimate is “conservative and probably will average higher.” The veins were traced 1500 feet along the surface and vertically over 1200 feet with the width of the veins averaging mineralization of 1.5 feet. Using this information, Mr. Oberling’s report estimated underground reserves at 652,000 tons. During mining, “it is assumed that other veins will be encountered . . .that will add to the tonnage.” Approximately 80,000 tons of open pit ore is also available on the top of the No.1 Tunnel outcrop and in the vicinity of the No. 3 Adit. At an average of 0.50 oz. gold per ton, this would result in 366,000 ounces of gold. Using the estimate of $1200 per oz., the reserves would bring in gross revenue of approximately $440 million.

Excerpts from Field Work and Results – 1999, prepared by James C. Haight, Registered Professional Geologist
“Field work during 1999 was focused upon detailed topographic mapping, bulk sampling, and overall site reclamation.”
“John Day from Cornerstone surveying was brought on site and a detailed topographic map was produced. The map, suitable for open-pit mine-planning, at a horizontal scale of 1” = 40 feet and a contour interval of 10 feet, was completed on September 30th. An overlay showing all surface workings, past and present, accompany this map.”
“Truckload-sized bulk samples from the most promising area of the lower Grandview and the Lucky Boy mine sites were collected.”
“All samples were taken from the upper drill site near the southern most working of the lower Grandview mine and from sites adjacent to the mail road at the Lucky Boy. These two areas are near the northern and the southern extremities of the anticipated open-pit.”
“Preliminary results from hand-sampling done at all bulk sampling locations confirms that the gold exists as extremely fine particles, closely associated with limonite, talc and clays. The gold presents a large anomaly with the shear zone that divides the serpentinite to the west and the Gray Wacke to the east.
At present, field evidence indicates an anomaly that is about 35 feet wide at the upper drill site and is about 200 feet wide near the Lucky Boy.”
“Preliminary results from work done by Hazen Laboratories, Inc., Golden, Colorado, confirms that the gold is closely tied to the soft limonite, talc, clay material within the shear zone. There also appears to be more gold present than has heretofore been indicated by the Assay reports. One reason for this suspected to lie in the makeup of fluxes.”

Originally known as the “Showdown Mine,” an operational partnership between Ralph Leonhardy and Pat Vinsom was terminated in July of 1947. A new partnership was formed when the property was obtained on a new lease by Leonhardy and Kenneth Grabner and renamed the “Lucky Boy Mine.” Grabner continued to hold the property until the 1970s when Art Cheatum, Dave Henley, and Cameron Avery acquired it. Cheatum discovered an ore shoot west of the original operations and beginning in 1978 produced moderate amounts of gold annually. During those years, the mine was known as the “Thomson Mine” and the “Schwayder Mine.” The various pits, adits, and workings were combined during this time and the area became known as the “Grandview Mine” which now consists of 20 claims. For 41 years, small scale mining operations have been conducted on a seasonal basis, with an aggregate mining total of probably less than 45,000 tons of ore. Although the mine has not been utilized to its full potential, the production to date has yielded excellent gold values with an overall average grade of .5 ounces of gold per ton of ore. Today, the mine is held by a private partnership.