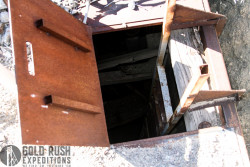 The Lucky Boy Property is located just outside of Oatman, Arizona. The area is well known for the production of native gold deposits on wide horizontal ore bodies. The mine, geologically, is situated on the southern side of a ridge where the Tom Reed and Telluride veins run. These veins do not have a defined terminus and are assumed to be continued into the Lucky Boy Mine workings.

There is very little history of the Lucky Boy property. The mine is assumed to have been initiated in or around the same era as the other mines of the area, 1880 or thereabouts.

Located in the Oatman Mining District on the Tom Reed Vein near Fort Mohave, Arizona. Known for only producing gold. Trails are narrow and best accessed by ATV. Road is in a wash.

The mine consists of three portals which have not been completely examined or explored.

The first of the workings is a hard rock shaft which is completely vertical. The surface cut and initial entry show country rock and some fractured quartz. Surveyors were not able to continue more than 50’ into the mine at the time of the survey due to flooding in the mine. The water level was roughly 50’ below the collar of the shaft. The shaft is built out with a metal collar and locking cover. A metal ladder is secured to the rock and descends well past the standing water level.

There is an air pipe that has been torn out of the shaft and discarded. A long waste dump is run with old ties but the rail is long gone. Off to one side of the shaft is a large commercial size adit that is fairly recent (1970-1980). The adit ribs have been bolted and secured and the mine is timbered with 8×8 timbers.

The mine descends quickly and runs into water at roughly the same level as the shaft. These workings are getting water from an underground water table and could be cleared with some pumping and mucking.

The final working on the claim is a shaft that is roughly 45 vertical feet. The shaft drops into a small stope at the bottom. Nothing is particularly interesting in this working except for one vein that runs through the granordite rock down to the stope. This vein shows some concentration of gold and copper with obligatory iron.

There is a metal loadout on the property which appears to be circa 1970 or thereabout. The dump is mostly a gray rhyolite type which appears to be largely devoid of other minerals. There are some sections of the dumps which intersect quartz and iron with some pyrite. The pyrite is interesting as it is noted to occur in the wall rocks near the veins but nearly absent in the veins.

The general area northwest of the Lucky Boy is being explored and worked for remaining remnants from the old Tom Reed Mine and the Gold Road Mine. A 2018 technical report shows the veins running through the Lucky Boy property to be the Tom Reed and Big Jim Vein on the eastern side of the Mallory fault.

The property has good access to established roads and being in a well-known region for gold development, there will not be excessive fees or bonds for reclamation or other mining-related costs.