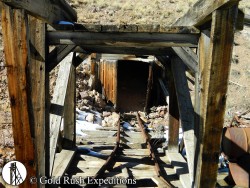 The Midwest is currently in a state of arrested decay. From 2003-2006 the Willow Creek Reclamation Society, funded by the EPA and Forest Service, “mitigated” or covered the waste dumps at the Midwest and also backfilled the portal to the mine.

The portal is reported as being bulk-headed with steel doors and has been secured since at least 1968.

The mine has produced an estimated 60,000 ounces of gold between 1911 and 1968. This number is not verified but estimated by combining reported numbers for the district along with private oral accounting's from the last known mine owner.

There are said to be heavily mineralized with silver deposits up to 1600 ounce per ton and gold averaging 1.5 oz/T.

The mine is ready for immediate development and according to oral communications shows exposed gold veins in or around the 900’ area with lodes trending generally WSW. This assertion lines up with outcrops located at old mine sites in direct line with the veins.
There is excellent access to the site via existing county roads. Barring snow and inclement weather, most any 2WD vehicle could access the site.

The site has been reported as having reserves worth over $6 billion dollars in 1988 while held in part by the Homestake Mining Company (Deadwood, South Dakota).

Located on and easy 2WD road and only 2 miles from Creede, Colorado.

The Midwest Gold Mine is possibly one of the most important and undeveloped properties in the Creede Mining District. The property has a long and detailed history which has included great discoveries and mappings of gold veins coupled with personal tragedies and bad luck which have deferred and blocked the ability of various owners to develop the site.

The site has been known and referred to by many different names, the Gateway Adit, The Ressurection Tunnel, The Colewood Tunnel and the Midwest Mine. These names have served to obscure a lot of history and development of the mine, however, simple logical deduction shows that this was a mine with substantial production and development. Possibly one of the largest in the Creede district and with substantial gold reserves.

The mine has produced an estimated 60,000 ounces of Gold between 1911 and 1968. Contact Jason at Gold Rush Expeditions with any questions or for more information