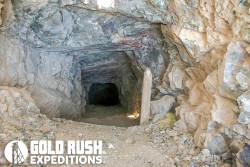 The historic New Standard mining claims consist of three (3) Lode Mining Claims which cover 60 acres of mineral property including a documented Millsite and substantial tailings and waste dumps. Located 17 miles east of Parker, AZ. in the Cienega Mining District which is known and documented to have produced over 11,000 ounces of gold prior to 1941.

The mines in the area produce native gold in quartz in pocket deposits. The mines are also known for copper deposits in the form of azurite and malachite. There are also reports of wide veins of nearly pure, deep blue copper.

The New Standard consists of a series of adits, shafts and prospects and a large milling area where substantial tailings are still visible. The mines have been well documented for mineral value but not worked since at least 1921 due to financial and legal constraints on the Arizona Standard Mining Company who held the claims for nearly 50 years. Surveyors located two accessible portals on the property and a number of other collapsed portals and small prospects.

The Property has been broken up into two distinct deposits, known as Mineral Zone and Dome City, these are both dome type extrusions and are clearly defined on the ground and via overhead views.

These accessible portals are assumed to be the last remaining of the 5 (five) that were reported open in 1921. The shafts are reported to be as deep as 365' (three hundred and sixty-five feet) with drifting on multiple levels.
Surveyors verified at least 300’ in vertical depth and substantial drifting on 4 levels.

The old mill contains many thousands of tons of tailings which are spread out in an easterly direction from the mill. It also lends credence to the assertions of rich gold processing without need for chemical separation.

Access to the mine is through a wash road that is a direct route but can be deep and challenging. High clearance 4WD is recommended. There are multiple concrete pads on the claim, a remnant of the old mining days. These are excellent for staging and parking of vehicles and or equipment.

The New Standard is a large claim site and is suitable for a small to mid sized mining operation. The underground workings will need rehabilitation, which is a simple task and can be addressed by the owner or a contracted mining development company.

A report from 1965 states that the gold was found in waste dumps at the New Standard and Little Golden prospect areas. These mines and regions are both contained on the New Standard Mine Claims.

17 miles outside of Parker, Arizona off a good 4WD access road. The dirt road does have a few technical sections.

The following is a compilation of the historical assertions and statements regarding the property. These sources Mining Engineers, USGS Geologists, Bureau of Mines staff and Masters Thesis. According to historical documentation and validation from Mining Engineers, the reserves at the New Standard Mine are worth at least $355,840,000.00 (Three hundred fifty-five million eight hundred forty thousand dollars).

The Standard Copper Company acquired this property in January of 1917. The prior owners invested $100,000 through the development of five shafts. After it was bought, the Standard Copper Company invested $35,000 in exploratory drilling. By 1919 the property had shafts that ranged from 10' to 100', and was further developed in 1921 where the shafts ranged from 10' to 365'.

Mining engineer E. J. Costello made this statement in 1919.

“I think there is a good chance to find large deposits of secondary enrichment, as the conditions are favorable, the ground, due to extreme fracturing, has carbonates of copper in most all fractures and cavities, but the porphyritic schists being almost thoroughly leaches, the values would in that case be carried down with the water and reprecipitated, as the natural solvents are in the field and would grow progressively richer with the continuation of the process. Those I believe to be the conditions of this property.”

"A common suite of elements found in anomalous concentrations is evident in analyses of stream-sediment, HMC, and rock samples from around the Pride, Mammon, and New Standard mines, the Little Golden prospect, and prospects near Squaw Peak. Anomalies are relatively strong for copper and iron, relatively weak for silver, barium, bismuth, molybdenum, lead, and tungsten, and variable for gold, arsenic, cobalt, manganese, antimony, and zinc. "

A 1920s report from a T. E. Kelso, a Mining Engineer from Los Angeles, CA stated the following:

“The geological conditions here are almost identical with the other large porphyry deposits of Arizona. The formations of the district are principally shales, andesites, rhyolites and granites, porphyry and schist. Overlying these is the pre-cambrian limestones.

It is characteristic of this district that the values in Gold·, Silver and Copper increase with depth, this having held true in all the mines now producing. The altered silicified zones lying in lenses between the porphyries are apparent.
The leached portions of the. surface exposes and promises a large amount of carbonate ores rich enough to leach on the ground.

The whole surface of this ground is certainly most promising of ore of a disseminated character and of a vexy much richer content than any of the ores now being worked by either the Ray Consolidated or Miami properties. The presence of much iron of the specular type is a reliable guide to the re-disposition of solved copper at or near the water level, and there is at present large tonnage of surface carbonate ores that can be profitably handled and will be a source of great revenue for many years. There are two distinct periods of intrusion and deposition that have taken place on this property. The main one has occurred from a north and South intrusion and the second from East to West known as the planet intrusion, on which is located the Swansea Consolidated property. This intrusion having broken through the planet range of mountains at this point overflowing this property, gives it a second. enrichment, which in my mind has greatly added to the richness and vast tonnage of sulphide ores lying beneath this deposit.”

He further made an assessment about the future development of the mine, stating:

As it is the intent of the company to commence immediately the erection of the first unit of the Ieaching plant I would recommend that the size be increased as rapidly as possible until you have at least a 500- ton plant. As there is already over 400,000 tons of carbonate ores blocked and as this is only a small part of the area under development, it is very reasonable to assume that at least thirty to forty million of tons of this ore can be made available in a very short period of development. The leaching plant should be increased until a five-thousand-ton plant is in operation and even with this daily tonnage it would require a great many years to exhaust this vast body of carbonate ores.”

If in fact this statement proves to be true and the ore grades are similar, the estimated reserves would be worth well over $35,000,000,000.00 (thirty five Billion dollars).
These statements are not forward thinking or speculator but based off of factual data and measurements provided by certified Mining Engineers.

The history of the New Standard up to 1922 is very detailed in regards to the development of the mines and the underground workings. Further, the description of milling facilities existing and in use from 1910 t o1922 match with what is existing on the surface today (2018). Based on this is it reasonable to deduce that the property has not been further developed or worked since the activity was documented.

It is also noted that in 1922, after the Arizona Standard Copper had funded the property, there were disputes with shareholders and primaries which hindered any further development of the property at that time.

Then the Great Depression put a near stand-still on most all mining and funding for ventures was virtually non-existant. In the early 1930s as the economy was recovering, WWII fears began to set in, further deterring efforts at mining and property development. By the time the War Act was put in place in the early 1940s, there was very little mining happening at all and the act killed what was left.

As such, the New Standard Mine has sat much as it was left in 1921-1922, with no work or development being executed on the site since the written reports.

Today the mine is open and mostly accessible. Intrusion into the workings does require some rappelling or rope work, however, this is only a small piece of what is exposed on the surface.

With a documented ore value of over $355mil and a potential block of more than $35bil, the site is long overdue for development. The mine sits in the remote desert landscape outside of Parker. This will make bonds and development costs low and maximize profits.

There will be some costs associated with rehabilitation of the mines and developing a processing plant on the site, but the cost will be no where near the $355mil that can be feasibly extracted from the mine. In processing 5000 tons per day the life of the mine is estimated at over 13 years.

400,000 tons of documented reserves. Total reserves are worth around $355,840,000.00 at today's metal prices. Contact Jason Expeditions for more information or with questions.