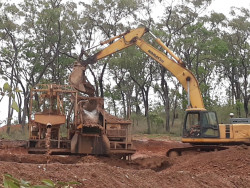 Palmer gold is known as some of the purest natural gold in the world and assays at 97-98% gold.

With a successful alluvial operation currently in production, this project represents a rare opportunity to secure a large group of Palmer River mining leases comprising 566 ha; plus exclusive rights to a further 60 square kilometres of Exploration areas in Far North Queensland.

This project offers the potential to launch a campaign to discover further resource, substantially increasing production & cementing security of longevity of the mining project.

The sellers may consider tailoring the offering to buyer’s requirements.

Estimated resource 1,863,000 LCM (Loose Cubic Metre) under granted mining leases plus considerable resource yet to be pegged within exploration areas.

The project leases are located on Mt Mulgrave and Palmerville cattle stations. Access is by Hurricane/Karma Waters Road off the Peninsula Development Road to Hurricane Road leading to Groganville; then by registered mine-access roads. Mareeba Shire annually grade the road to the Groganville turn-off. Acccess may be restricted for short periods during wet season (December to March)

On review of the method of mining conducted by ADR/AUR; creek beds previously mined by that company were re-tested by G Donovan & G Robinson. Results proved up significant gold reserves remaining in creek beds and on some higher terraces. Some of this resource has been secured under granted mining leases.

The current mining operation relocated to this group of tenures beginning 2016 and is currently working on other ground in the area, consistently producing 1 ounce to 80/100 per m³.

The following sections are a quote fro CR20418(A to P 4048) Hamilton. G, 1988 Solomon Pacific Resources NL (reference)
REGIONAL GEOLOGY – The area is underlain by Middle Devonian to Lower Carboniferous rocks of the Hodgkinson Formation. This formation is a thick accumulation of micaceous greywache, siltstone and slate with the intercalcations of basic volcanics, cherts and conglomerates. These lithologies have been metamorphosed to greenschite facies and are steeply folded and strongly cleaved.

LOCAL GEOLOGY
The principle lithologies making up the Hodgkinson Formation in this area are the strongly cleaved phyllites and sandstones which, being the least resistant units, are exposed only with in the creeks. Areas between the creeks, along the ridges and spurs are generally covered in quarts and chert float derived from pyritic quartzites (recystallized chert), cherts and the quartz veins and quartz fault infilling which form the more resistant interfluves.

Gary Donovan (owner) has mined and prospected the area over a 28 year period, culminating in securing rich alluvial ground. Mr Donovan has an intimate knowledge of the subject area and its history. He was Operations Manager for Madden ResourcesNL (AUR/ADR) 1988/89) and worked for CRA as Operations Manager at Mt Kare in the highlands of Papua New Guinea. Using this experience, the Donovan family has mined in the area for 27 years and accumulated significant leases and exploration areas for future production.

Historically, exploration and drilling for hard-rock has been carried within the subject area by several companies; BHP, Strike Exploration, Carpentaria Gold, Shell, Solomon Pacific to name a few. Donovan’s held a JV with BHP for over 9 years under EPM:9795 (Kennedy’s,McGann’s/Jabiru Creek area) under which extensive exploration was carried out within the subject areas. BHP withdrew when they joined BHPBilliton as at that time as their focus was away from gold.
HISTORIC COMPANY REPORTS AVAILABLE ON REQUEST