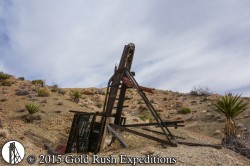 A 1936 reconnaissance report from a bureau of Mines Geologist noted that the El Dorado, El Dorado Rand and the Quaker City properties were mostly inactive with only a single individual on site. This person was working native gold ores from the western most workings from a small shaft that intersected the Quaker City vein. Of note was the mention of the refined concentrates being stored in a small vault below the head frame. This matches up exactly with the current state of the Quaker City and gives validity to the gold values and workings on the claim.

The Quaker City Mine is located within the El Dorado Mining District and is one of the primary producers of the district. There is some history of the mines from the 1920-1941 era. In 1941 the mine was closed by the War Act.

Post-War Act closure, the mine was held by the Quaker City company who held the mine into the early 1980s when it was sold to a larger mining company for development with the skyrocketing price of gold. When the gold prices fell again the company was disbanded and the site was again abandoned.

There has been no significant work done on the Quaker City since its closing in 1941. The work in 1981 consisted of some shallow dozer cuts for validation of values and ore body definition.

In or around 2012/2014, the Bureau of Land Management in conjunction with Forest Service paid for “reclamation” work to be completed at the site. As part of this effort, the adit on the western facing slope was backfilled as was an adit on the east facing slope of the hill where the Quaker City Headframe sits. The shaft below the headframe was blocked with a 2’ layer of PUF Foam and then dirt put on top of the foam to mitigate any safety hazards to the public.

Prior to this closure, the Quaker City was noted as having a shaft that was 150’ deep, cut on an incline. There were two access portals on the east and west side of the shaft which opened up access to the Quaker City vein which was producing up to two (2) ounces per ton in native gold. Average grade noted as .95 oz/T. There are/were multiple connecting drifts and workings. Total workings are reported as over 1050 linear feet.

Waste dumps on the property have been spread out and cover a large area. There are an estimated 20k tons of waste dump spread out over an estimated 4 acres of ground. In the tailings there was seen granite type rock with some quartz and pyrites. Gold was occasionally seen in native form, in white quartz veins.

The property is noted as one of the last producing gold properties in the district prior to the War Act closure. In addition to a head frame, there are also two vaults on the property, further testament to the gold values in the mines. Contact Jason with any questions or for more information regarding the mineral property