160 Acres of patented and BLM Claims For Sale 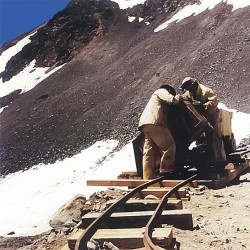 The Santiago Mineral Property is located just outside of Georgetown Colorado in the East Argentine Mining District. The Santiago property consists of both patented and BLM land for a total of 12 lode claims.

There are 3 purchase options available for the Santiago.

$6 million to begin Mining Secured with a $8,000,000 payback. Investment of $6 million, fully protected to be used for the following: Site and above ground development, including early recovery of the estimated 60,000 tons of verifiable, already mined ore and below ground drifting on ore in pursuit of opening Santiago ore bodies. This first phase of construction and development will take on full mining season. At season’s end, the investor will inspect development work and decide on participating in the Joint Venture, and exercising his option to purchase for $33,000,000.

Investment of $15 million ($6 million down, and $9 million over 3 years) to include participation in a Joint Venture with equity and net profit sharing for the life of the mine (estimated to be 62.5 years). An average 6 month mining season, until the completion of the blue haulage tunnel, which will allow for year-round mining, will return the Joint Venture Partner the average of $11.5 million net revenue per year starting at the end of the ramp up period or $345 million in the first half of the estimated years of mine operation. If Option #2 is not exercised, the investment capital of $6 million will be secured with prove, processed, already mined reserves and other equities on newly mined ores until the investor receives a return of $8,000,000. This will terminate Option #1, and the investor will have no further involvement in the Santiago Mines.

Located just outside of Georgetown Colorado in the East Argentine Mining District.

The Santiago Mine located is in Colorado’s East Argentine Mining District that straddles the Continental Divide and is known for its high grade gold and silver ores. The Santiago properties are located on three major fracture zones within the high confines of a glacial cirque and the interior of Mount McClellan.

The Santiago ore body is on the Southern portion of the Santiago-Commonwealth-Centennial-Rosalie vein, productive for over a mile, and is traceable for 15 miles. The Santiago has been opened for a distance of 1400 feet and a depth of 700 feet on a vein width of 2 feet – 10 feet with an average width of 3.5 – 4 feet.

It has become known as the Mother Lode of the district because of the uniform tenor of ore with gold increasing at depth until the Government closing of the mine via Law 208 during WWII.

Last reported values in 1941 from Leadville, Colorado smelting records were 17.32 ozs gold, 33.5 ozs silver, and 45% lead per ton! There were 11 Santiago original claims, #3, #5, and #6 are very large, paralleling veins showing ore on the surface, never explored.

The Santiago Blue 3 is in the second zone showing its face on the sheer eastern flank of Mt. McClellan. It is the continuation of the Independence vein, the first silver strike in Colorado. In 1906 Independence values reported were 17,000 ozs silver and 259 ozs gold, and this was known by miners as “smuggling” grade. All mining at this time was done by hand. The entire quartz lode ran $600 - $700 per ton at $19/oz gold and 47₵/oz silver!

In 1911, the Santiago II Group consisted of 4 known veins. A 160 foot prospect drift was driven on the additional #II vein some 400 feet above the basin floor. The Santiago II Tunnel was driven 1100 feet from the basin floor in an attempt to cut the Santiago II that outcropped as a 3 foot sheeted zone. Only the #3 and #4 veins were cut. The #3 vein was $50 per ton with gold predominant and the #4 vein assayed 5.28 oz/ton gold and 180 ozs silver. Stoping was scheduled in 1913 until the mining era ended for the Santiago II and the Group of the #3 fracture zone. The II dump assayed in 2009 at 40 ozs silver and .574 ozs gold. The Santiago II is the southern continuation of the Wheeling vein, opened for 1000 feet with a 5 foot width, containing 70% smelting grade and 30% shipping grade ore. 1891 reports show assays of gold at .33 ozs and silver at 246 ozs per ton. The Santiago Blue and II Group are estimated from historical documents by owners at $600,000,000 in recoverable smelting grade ores.

In 1913, massive caving of talus in the Santiago II drift and the stripping of the East Argentine railroad tracks in 1918 for the WWI effort prevented the economical transport of ores from the district. However, the Santiago Mother Lode continued production until 1927 with horse and wagon and some intermittent production through 1941 with final closure during WWII. Smelter receipts available for 1939 – 1941 showing average mill recover grade at .81 Au.