Extensively sampled and drilled project in California's Motherlode. Too much for us to work on right now so we are offering it for lease. 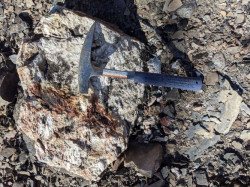 Within two miles of railroad transportation that could send ore to Nevada for heap leach processing.

Offered for lease is the Central Gold Project in Northern California. The project consists of 222 acres of unpatented claims with year round access. Several million dollars have already been spent on exploration which proved a resource of over 250,000 ounces.

The recent fire cleared a lot of the brush and made access much easier. I am offering the claims for lease on very reasonable terms although I would consider selling the property outright.

The Melones Fault, the main structural feature of the Mother Lode, parallels the deposits 550 feet to the west. The fault and hanging wall rocks strike roughly 35 degrees northwest and dip 55 to 70 degrees northeast. The felsic horizon is variably mineralized with thin mesothermal quartz veins, sheeted zones, and massive silicification. Gold is present within sheared sections that contain up to 80 feet of silicified material. Numerous mineralized sections in excess of 20 feet are indicated on mine maps. Quartz veins that extend into bounding shale units contain low gold values. Gold is associated with strong silification and requires fine grinding to liberate. Mineralogy includes, in order of abundance, quartz, feldspar, sericite, chlorite, hornblende, mariposite, pyrite, galena, sphalerite, gold, and silver. Base metals are present only in trace amounts. The Central zone is the western continuation of the Virgilia zone, which is located at 800 feet lower elevation. The contrast in elevation indicates mineralization extended over 2000 feet down dip before erosion.
The Central deposit was found to consist of 4 parallel 'veins' or silicified zones, all confined to a single tuffaceous horizon that pinches and swells and contains thick selvages of slate. The silicified zones dip 65 degrees
northeast and varies from 5 to 70 feet wide. Veins 2 and 3 contain the bulk of the tonnage. The veins are exposed discontinuously at the surface and much of the richer ore is located just below outcrop.
The English Tunnel follows Veins 2 and 3 for over 600 feet. Two hundred feet above the English Tunnel are the smaller Upper, Middle, and Trails End Tunnels which are caved at the portals. The Blacksmith Tunnel is 500 feet in lower in elevation than the English Tunnel but was driven on the veins from a point 2000 feet east. This tunnel is open for 1000 feet and could be extended 1000 feet west to provide access to lower reaches of veins 2 and 3.

Exploration of underlying quartz veins began in the 1870’s with most development directed at vein exposures on the Central property.
Homestake Mining Company evaluated the properties between 1927 and 1930. Tunnels on the Central were expanded and several diamond drill holes were completed. The drilling confirmed the vein system extended from outcrop to at least 1000 feet down dip. A fire destroyed Homestake’s hoisting plant in 1930, leading to the termination of the exploration program. Drifting on the English Tunnel by Homestake at the Central mine confirmed “a good body of ore averaging 0.198 ounces gold per ton”. A total of 1,032 channel samples collected from the Central workings during 1929 and 1930 averaged 0.11 opt. Assays of up to 11.0 opt were recorded but were not included.
In 1980, Inca Mining Corporation consolidated the land position throughout Rich Gulch and from 1980 through 1984 undertook an extensive drilling program with the intention of establishing open pit mines at the Virgilia and Central. A total of 241 drill holes totaling 75,941 feet of drilling were completed. In total, over $5 million was spent on geological, metallurgical, economic analyses, and environmental studies. The program was terminated in mid-1980 with the collapse of the gold price. Inca’s published geological reserve for the Virgilia and Central was 17 million tons @ 0.084 opt, with mineable reserves totaling 1.5 million tons @ 0.13 opt for the Virgilia and 3.6 million tons @ 0.07 opt for the Central.

A detailed report on the property can be found here http://americanminingclaims.com/wp-content/uploads/2021/10/CentralReport.pdf