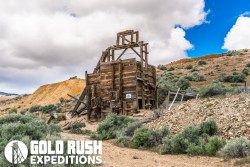 Mill City District – Pershing County, Nevada
There is drive up access to all but one of the shafts.
High clearance 2WD vehicle can make it to the claim site with no problem. 4 wheel drive is recommended
Contact us for exact coordinates.

Somewhat remote, but very historic gold mining area. The area is known for gold recovery in washes and alluvial plains. The gold deposits, while known, are not widely mapped And the extent is largely unknown but favorably reported by development geologists. The Keystone mine provides excellent value for a small to medium sized commercial operation. Commercial is recommended as there will be some investment required in permitting and clearing the shafts and adits for safe working.

There is extensive tonnage in gold and silver reserves noted in 1940s US Bureau of Mines and Geology reports. The extent and depth of the deposits are not mapped or defined but described as likely very large. Large enough to support the proposed development of a small town to house the miners in 1942.

A series of 4 lode claims covering the actual workings and outcrops of the historical Keystone Mines and the Tamzy Claims.

The Keystone Mine site could be broken down into two camps, east, and west. The West Keystone Mine Camp has been known as the Keystone #4 and 5 and the Tamzy #3. These workings are accessible when dry, but will require some pumping and clearing work. In the spring season, the adit contained 3' of water making it largely inaccessible. The shaft above is in good condition but the exposed timber work has started to collapse and will need to be cleared. There are many open trenches and exposed ore bodies that have been sampled as recently as 1981. Gold is the primary element that has been worked in the mines but there are also reported deposits of silver and platinum.

The eastern Keystone Mine camp covers the historic Keystone Mine, Keystone Mine 2-5, and the North Keystone Mine. These mines are the primary workings as reported in historical reports. The mines are easily accessible. Surveyors documented thousands of tons of ore have been blocked out underground in the smaller workings. Air shafts from upper adit can also be used as escape routes which are required for commercial operations. Surveyors observed a wide gold and silver lode in the mine that has been sampled and lightly worked. Vein gets as wide as 3 feet in some areas and pinches into the size of a thread in others. Ore is dark, heavy with lead and silver and has some visible gold flake in it. Lode and veins are still intact and should be explored and worked further.

Access to the Keystone Mine is direct and simple. Getting trailers or equipment to the site on the current roads will not be an issue. No need to improve roads for machinery. Impressive amount of ore carloads were removed from the upper adits lower level (not surveyed) as evidenced by the carbide ore car markings inside the mine. Headframes would need to be stabilized before use.

Two limestone beds, the Sutton and the Stank, have been developed. In March 1936 the deepest workings were nearly 1,000 feet below the surface. The Stank has been the most productive bed; it averages 41 feet in width. The beds dip 75 degrees and are well-adapted to mining by shrinkage stoping. The ore, although hard, breaks well, and the walls require little support. The beds are mined in sections, each stope section being 75 to 80 feet long. Chute raises are driven at 15 - to 20-foot intervals. Machine drilling is employed.[1]

Silver and copper ores were mined in the Eugene Mountains in the early days. The first discovery in the Central district was made by L. Vary in 1856, when the 56 Copper mine 7 miles west of Imlay was located. Copper ore was produced in this mine in 1917. The production of precious metals from the Eugene Mountains has been very small in recent years.

Tungsten ore was discovered in 1917 by Emil Stank on the southeast slope of the Eugene Mountains about 8 miles west of Mill City. Two concentrators were built in 1918 - one by the Nevada Humboldt Tungsten Mine Co. and th other by the Pacific Tungsten Co. The Nevada-Massachusetts Co. purchased the Pacific Tungsten Co. in 1924 and later acquired the Humboldt Tungsten mine. In May 1925 the Nevada-Massachusetts Co. began operations that have been continuous since then, except for a short period in 1932 when production was suspended because of no market. From 1925 to March 1, 1936, 510,000 tons of scheelite ore have been produced that averaged nearly 1 percent WO3. Operations prior to the Nevada-Massachusetts Co. activity are estimated to have yielded 50,000 tons of scheelite ore. The property of the Nevada-Massachusetts Co. comprises 13 claims in one group. Production is about 240 tons of ore per day; 100 men work in the mine and mill. Mill City ranks among the important tungsten-producing areas of the world, and since 1925 it has been the largest producer in the United States.[1]

Access to the Mine: There is drive up access to all but one of the shafts.
Tailings Present: 50,000 + tons, Lots of oxidized iron ores, lots of white quartz, pyrite cubes. Some native gold with pyrite, copper.
Entrance: Solid Rock
Mine Cut: Shafts and adits
Depth / Length: Over 2500'
Minerals in the Mine: Gold, Silver, Lead
Foot Traffic in the Mine: None
Last Worked: 1961