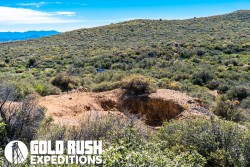 You can drive to within 300 feet of the mine entrance. There is a wash below the mine that prevents vehicles from traveling directly to the mine.

The claim is located 3 miles off the main highway. The last 1 mile to the claim is on a high clearance 4WD dirt road.
Contact us for exact coordinates.

The Radio Mine site is made up of a shaft, and adit and some small trench workings. Supporting the Radio Mine workings are the foundations of a small processing plant, winch and whim foundations. Surveyors also noted hand-built walls and roads and the remains of an old miners cabin which appears to have had a small smelter in it.

The Radio Mine is located in the highly coveted Cherry Mining District. Known for producing native gold from small, hand worked mines over the last 250 years. The Radio Mine is in a remote area and somewhat difficult to locate due to heavy undergrowth and run off. A large wash has formed between the road and the mine workings, this combined with the undergrowth make the mine nearly invisible from the road or the valley.

A short hike leads up to the old mill site and crush area. Lots of quartz, copper, and iron noted by surveyors. Foundations for some sort of hoist and hand stacked walls, likely for some sort of workshop or assay shop.

The main shaft of the Radio Mine is over the hill from the mill area. There are remains of a small miners house across from the mine. Estimated depth of mine likely 100-150 feet, with drifting of 800-1000' assumed based on the size of the waste dumps.

Some native gold noted in the waste dumps attached to clear quartz. While there was some lead seen in the dumps, the mines and the region are noted for the production of only gold.

This mine is recommended for small miners with some capital available to clear the main portal of the Radio Mine for purposes of sampling and drilling. The road should also be improved and the portal secured to protect miners interests. There will be a plan of operations required to utilize machinery for clearing the portals and roads.

Most of the district is in the upland basin of Cherry Creek, with elevations of 5,000 to 5,500 feet, but part of it extends down the steep eastern slope of the Black Hills. The prevailing rock is Bradshaw granite, locally overlain by Cambrian and Devonian sedimentary rocks and Tertiary lavas.

The veins occur in the granite, within shear zones which strike north-northeastward and dip at low or moderate angles westward. Their filling consists of irregular, lenticular bodies of massive, shiny white quartz with small amounts of greenish-black tourmaline. The ore is marked by irregular grains and bunches of more or less oxidized chalcopyrite, bornite, sphalerite, and galena. In places, pseudomorphs of limonite after pyrite are abundant. Although the water level is about 60 feet below the surface, oxidation, which is probably of pre-Cambrian age, extends to depths of 300 feet. The ore bodies are generally small. Part of the gold occurs as visible but fine particles in the quartz, particularly with limonite, but part is contained in the sulphides. Lindgren 15 states that the concentrates after amalgamation are reported to contain from 4 to 5 ounces of gold and a small amount of silver per ton. He regards these veins as positive examples of pre-Cambrian high temperature deposits. The Cherry Creek veins have yielded no placers of economic importance.[1]

The Arizona Comstock or Radio group, east of Hackberry Wash, is reported to have produced some ore from near the surface during the early days. It shows a steeply southwestward-dipping vein, up to about 20 inches wide, that was opened by a shallow shaft, a winze, and about 100 feet of drifts.[1]

A 1984 line item from the USGS reported the following:

KAP WR 8/31/84: G. Phil Bramwell, Financial Consultant, Florissant Colorado 80816, phone (303) 748-3754 was in to review a proposal for financing a cyanide heap leach - gold mining venture by a group known as Col-Ari Mining (c) POBox 26407, Prescott ,Valley. Col-Ari plans to mine and heap leach gold bearing material from a group of claims. Mr. Bramwell is assisting the Col-Ari group in trying to obtain financing through .banks and the Small Business Administration. The written proposal lacked any information about the ore deposit or metallurgical testing. The claims leased by Col-Ari from Leon Scheal and Associates, POBox 501, Dewey, Arizona 86327 are the TG #1-#14, BS #1 -#25~ Megan Rae, June Marie, William Hollis, Rosetta Mae, Andrew L., Sandra Lynn and Gloria Jean. It appears this property may coincide with Yavapai MILS Index #689 known as the Radio and referenced in Arizona Bureau of Geology Bulletin 137 on page 32.[2]

The Radio Mine is located shortly outside of Cherry in the historic gold producing region. The mine shows quartz, some native gold and lead in the waste dumps. Shaft is in rough condition and will need rehabilitation before accessing. Shaft is cut on a distinct lode of quartz with heavy iron staining. Good indicator of gold values. Expect that on the vein inside the mine gold values will average 2 oz per ton based on historical accounts of the region.