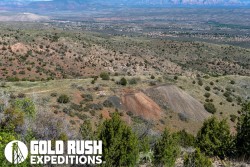 The Verde Combination mining claim is less than one air mile from the town of Jerome and the old, deep mines of Jerome. The Verde Combination is documented to be owned and developed by Verde Combination Copper as late as 1919. The mine is noted to intercept the Revenue vein and the Verde many other drifts and tunnels. There are no other known portals that surface except for the adit and the shaft on the claim.

The shaft has been historically known as the Cliff Shaft, and the adit has been known as the Gorge Tunnel. In later years (1920-1960) the mine was referred to as the Green Monster collectively.

It is assumed that this group of workings intercepts the Verde Combination (Cliff) shaft, but it is unverified due to a drift inside that is blocked by slough.

There is good road access to the portal of the mine but short wheelbase, 4-wheel drive and some technical skills will be required due to challenges on the trail. Most notably are off camber turns and washouts.

The Verde Combination is roughly 3 miles south of the town of Jerome. The shaft is historically documented to be 930' deep with a drift at the 500'. Over 2000’ of drifting on that 500' level. In addition, an adit less than 1000' west of the shaft is documented at over 800' with values of gold, silver, and some copper. Because of its lineage, the mines have been referred to as the Green Monster or the Verde Combination.

The Verde Combination has limited public history available. It is noted in 1923 as being a 900' shaft with 2000' of drift workings. The mine was noted to be producing gold and silver in a chalcopyrite type ore. In 1923 the ore was assayed at $75 per ton in gold and $100 in silver. Roughly, that's 3-3.5 ounces of gold ($20 per ounce) and 153 ounces of silver (.65 per ounce). At some point in the 1930's it was taken over by the Green Monster Company. It was renamed the Green Monster and an adit was cut on the north side of the mountain that chased the Verde Fault. It is assumed that this group of workings intercepts the Verde Combination shaft, but it is unverified due to a drift inside that is blocked by slough.

This drift is plugged with slough at what the surveyors assumed to be 50' away from the intersection with the shaft. It would take some effort to remove the muck and re-open the drift. It would provide easy access to the shaft and the workings therein and likely be quite close to the drift at the 500' level.

There is a large platform that was used for winches and air compressors above the main shaft. These footings are consistent with the era of mining reported. The equipment was likely moved to another mine as there are no remnants of the headframe, or any of the machinery. It is always possible that the headframe and the machinery were pushed into the shaft and may be found at the base of the workings.

The roads to the site are well defined, and the route from the south is the only accessible path of access. 4WD is mandatory for steep and narrow roads with some off camber sections. The road is open, but has some technical sections. This has kept most vehicles and UTVs from accessing the site. Once at the claim, there is ample room for staging gear and machinery for processing.

The town of Cottonwood is at the base of the mountain and offers all of the amenities that could be required.

The Green Monster Mining Co.'s property of 68 claims is mainly 3 to 4 miles southeast of Jerome, but two of the claims are 1 mile south of Jerome. The main shaft, 930 feet deep, is said to bottom in diorite. On the 500-foot level the northwest crosscut reached the Revenue vein and at 600 feet encountered the "quartz porphyry " contact, which contained some chalcocite and chalcopyrite in a highly kaolinized leached zone. The Gorge tunnel is on the Cliff claim, north of the Equator property, and was once owned by the George A. Treadwell Mining Co. The tract contains several large jasper outcrops, and that of the Cliff claim shows commercial ore at the surface. The Cliff shaft connects with the Gorge tunnel. Drifts started both east and west on a mineralized contact of "quartz porphyry," and diorite developed a low-grade ore body which, 100 feet below in the tunnel, seemed to be bottoming in " quartz porphyry." Work on the property was discontinued in 1919. The Brookshire tunnel, in the northern part of the property, is 3,000 feet long on the contact of greenstone and diorite belonging to the same complex. Quartz with much chalcopyrite is exposed on the dump.

The Verde Combination Copper Co. has 33 claims south of Mescal Canyon, 1 mile southeast of Jerome, and west of the Gadsden. The developments comprise a shaft 1,300 feet deep sunk in green-stone a short distance west of the Jessie fault. Some work was in progress in 1922. The shaft connects with extensive workings in Mescal tunnel, which shows the great Verde fault, also 2 feet of 5 per cent copper ore in a fissure vein, and two promising contacts with stringers of copper ore. The old workings at the south end of the tract include two shafts, 640 and 500 feet deep, showing diorite with stringers of copper ore, and a 75-foot tunnel that opens a 3-foot quartz vein.

From a 1939 reporting of the Verde Combination Group:

The 1300 foot shaft (sunk in green-stone) connects with extensive workings in the Mescal Tunnel, which shows the great VERDE FAULT, also 2 feet of 5% copper ore in a fissure vein, and two promising contacts with stringers of copper ore. The SPOKE and CHAUTAUQUAAN, two valuable claims, may be included in this group if desired. Good ore on surface of SPOKE claim. Gossan outcrops on CHAUTAUQUAAN claim.

A large block of claims north and northeast of the Copper Chief is owned by this company. The main shaft is east of the Verde fault and north of the road leading to the Copper Chief mine. Precambrian rocks are exposed in the canyon below the Tapeats sandstone, and the collar of the shaft is in quartz porphyry. Fragments of quartz porphyry, Shea basalt, and tuffaceous sedimentary rocks are on the dump. Specular hematite veinlets appear in many fragments, but no sulfide minerals were observed. According to Lindgren, the shaft is 930 feet deep and on the 500 level, a northwest crosscut contacted the quartz porphyry containing chalcocite and chalcopyrite in a highly leached zone. West of the Green Monster shaft and of the Verde fault, an adit level containing about 800 feet of workings, explored a northeastward-trending gossan. It is reported that some gold was found.

3 miles south of the historic mining town on Jerome, Arizona. In 1923 the ore was assayed at $75 per ton in gold and $100 in silver. Roughly that is 3-3.5 ounces or gold ($20 per ounce) and 153 ounces of silver (.65 per ounce). Contact Jason with any questions or for more information regarding the mineral property