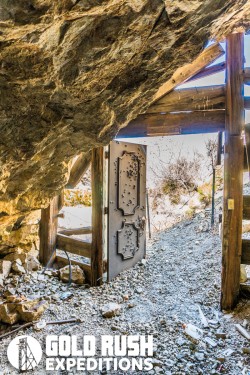 El Dorado District – Clark County, Nevada
You can drive to within 200 feet of all the adit entrances.
Majority of the road is an easy 2WD dirt road with the exception of the last ¼ mile to the claim. The last ¼ mile will require a high clearance 4WD vehicle.
Contact us for exact coordinates.

This mine has historically been referred to as the El Dorado-Rand or the Rand mine. It is located in the Eldorado Mining District and was worked primarily for native, or free-milling gold deposits with silver as a byproduct.

There is some history of the mines from the 1920-1941 era when the mine was closed by the War Act. The reporting was that the mine was profiting $2000-$2500 per month (1930s pricing) with a staff of 16 people working at the site including the cooks and the milling costs. In today's dollars, that's roughly $36,000 per month in profit.

It is also reported that the mine was able to profitably run with only one miner working.

The mines in the area historically produced 20-40 dollars per ton of gold and silver ores. This was back in 1907 when gold and silver pricing was significantly lower than it is today. Gold at $20 per ounce and silver at less than $1.00 per ounce.

The El Dorado-Rand has multiple connecting drifts and workings within the mine with winzes and stopes working down to multiple lower levels. Total workings are estimated over 3500 linear feet.

The gold veins and deposits in this area are known to run generally horizontal. For this reason, the mines have been cut with long drifts connected by shafts and winzes.

Roads to the El Dorado Rand are in relatively good condition and can be traversed by most any 4WD vehicle with high clearance. There are some technical areas that may require a spotter the first few times in. With care, it is possible to bring a trailer in as well.

Surveyors found various implements of previous miners on the property. The site operated an assumed flotation mill at one time. Foundations from the mill are all that is left of the milling operation. There are various concrete foundations.

Additionally located was evidence of an old leaching pond and large amounts of tailings (processed ores). This was a very large site that even operating with 16 people was turning quite a profit before it was shut down by the War Act. If the new owner could even match what the previous operation managed they could plan on a yearly profit of over $3.5 Million.

Being that this is a smaller, and less developed property it would be ideal for a small mining company or a few individuals. It is suggested that a notice of Operation be filed so that the roads could be cleared to expedite the shipping of ores. Ore could be shipped to one of many processing facilities in Nevada with no additional taxes or tariffs imposed. For more information on this, please contact our office during normal business hours.

N-S belt of Precambrian schists and gneisses intruded by quartz monzonite; areas of Tertiary eruptives along the belt. Narrow fissure veins in gneiss and schist are composed of vein quartz and altered country rock with calcite. Ore minerals are auriferous and argentigerous pyrite, galena, and sphalerite. Ore bodies also occur in fissure zones in quartz monzonite.[2]

From a 1931 report on the El Dorado-Rand property,

There are two mines on the property in which considerable underground work has been done, the Rand and the Quaker City, about 700 feet apart. The Rand shaft has been sunk 500 feet deep on a 60 degree incline, with levels at 140, 300, 350, 400, and 500 feet, and is reported to have produced over a quarter of a million in the past. There is considerable ore in sight but of a low grade. The Quaker City shaft is on a 15 degree incline and runs in several hundred feet. The ore at present comes from a 9 foot vein, with 4 feet averaging about $26.00 and 5 feet averaging $5.00 to $7.00, which gives a mine run ore of about $16.00 from which better than 90% recovery is made. About 55% of the recovery is made on the amalgam tables, the balance from the cyanide process.

The present operation is netting from $2,000 to $2,500 per month, over and above all costs of operation. The mine is running one shift, the mill two shifts and handling from 18 to 20 tons per day. A crew of 16, including Superintendent, boarding-house cooks, etc., is employed. One miner produces enough ore to maintain the operation on this basis.[1]

Access to the Mine: You can drive to within 200 feet of all the adit entrances.
Tailings Present: 10,000-49,999 tons, Mostly waste rock seen.
Entrance: Solid Rock
Mine Cut: Shafts and adits
Depth / Length: Over 2000'
Minerals in the Mine: Gold, Silver
Foot Traffic in the Mine: None
Last Worked: 1991