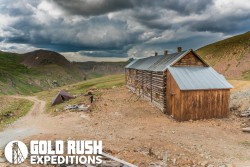 Galena District – Hinsdale County, Colorado
Drive up, 4WD only
Walk in through gate
Contact us for exact coordinates

The Golconda Mine is a rare beast, and an incredibly valuable site. With free milling gold values averaging .97 OST over a 21 year mining period from 1919 to 1940. There are reported to be 7000' of drifting in the mine, with no accounting for stopes or working spaces. The history of the mine is quite well established and there is plenty of gold to be had just from the waste dumps. The Mine closed major operations in 1941 with the war act. It remained idle due to its remote location until 1946 when an operation came in and recut new tunnels to access the workings since there was a major ice blockage impeding their work.

In 1947 it was reported that there was over 7000' of drifting in the mountain, it was a specific account that said this number did not account for stoping or worked out areas, nor did it account for the rail operations inside the mine. There is no further history until 1977, when the USGS reported the mine to be owned by Golconda Mines who had made a 150' cross cut to again intercept the old mine workings. Golconda worked this mine until 1984 and the ore was incredibly rich. Reported to be an average of .97 OST in free gold, but some pockets came out as high as 17 OST in native gold. Silver is present but not noted in valuations.

The boarding house on the claim is on the National Historic Register, which does not preclude its assumption of use under a properly executed Notice of Operation. However, if you damage it, you should expect to be held liable in all aspects. The real value is in the mine, which is where the real history resides. The men worked in the mines, this is where men exuded blood, sweat and tears while chasing the gold. Full mapping of the mine and underground documentation is under review and may be released to serious buyers only.

If you want to own a piece of history and you aren't afraid of weather, roads and all of the other perils that are of concern at 12,000', this may be the mining claim for you. Vendor, Inc. surveyors recommend this site for people with some knowledge of underground workings and safety. This mine could be developed to a major commercial operation or simply used as a piggy bank for some small miners. Gold Rush can assist you with the creation of all documentation for permits and processing. We also offer our signature no cost legal assistance which includes representation by Mr. Russell Hartill on our dime in most cases. Please contact our office if you have questions.

The geology and mineralization of the district is typical of the western San Juan Mountains. The district sits within the caldera fill on the northeast margin of the Lake City Caldera. Units include Oligocene quartz latite and andesitic flows and breccias of significant lateral extent, plus more localized flows; the Bachelor Mountain and Carpenter Ridge tuffs, the Fish Canyon tuff, the La Garita tuff, the Henson and Burns formations, the Sapinero Mesa, Eureka and Dillion Mesa tuffs along with silicic lavas.[1]

The property's boarding house was built in 1920. It's a two story log building that's 98.5' long and 18' wide. Along with a compressor house, this complex is located at the head of the alpine basin. The compressor house still contains hard rock mining machinery. The underground workings were reported to produce gold, silver, copper, lead, and zinc. This is the largest log structure on the east side of the Alpine Loop.[1][2][3]

A 1921 report from the Mining Journal reports: "Golconda Mines Consolidated their long crosscut in Basin and have begun the vein with a good showing ore Operations will the end of the year and be until next spring the of the company during recent having shown it to be to continue operations the winter at so high an far from the base of supplies Lake City ."

There is other interesting history as well, such as this account, published in the Aspen Weekly Times, September 29th, 1894: "True Account of _Captnln Jackson s Deed Of Self Defense, Mancos , Colo., Sept . 26 . —The particulars of the killing of Jack Sparks by Captain G . A . Jackson at the Golconda camp of the J . N . & E . Placer Mining company are about as follows : A misunderstanding had occurred between the two men as regards certain payments that Sparks claimed were due from the company , but which Captain Jackson did not feel at liberty to allow . This exasperated Sparks , who was heard on the streets of Mancos on Saturday to say that he intended to kill Jackson .
William Hush , who carries the mail between Mancos and Golconda was in town on Saturday and on leaving for camp in the afternoon Sparks persisted in accompanying him , saying that he intended to kill Jackson on sight . He was armed with a revolver and a shotgun . Hush tried to prevail upon him to go back , but he-refused to do so and growing more excited told Hush that if he attempted to do or say anything to prevent him he would kill him , too , and emphasized his assertion by firing bis revolver so close to Hush's head that the letter carriers face was powder burned . Hush, seeing that Sparks was bent upon trouble, stopped at a ranch some distance below the camp, ostensibly to get a drink of water, but sent a boy ahead to warn Jackson of his danger . As they drew near Golconda camp Owens and another man met them and tried to prevail on Sparks to go back, but the latter again refused , saying he intended to kill Jackson . When they entered camp Captain Jackson was in his tent . He had armed himself with a double barreled shot gun loaded with buckshot . Hearing the footsteps he walked out with the gun on his arm . Sparks was coming up the trail and Jackson called to him: Hello, Jack ! Sparks on seeing him threw his hand back on his revolver. Jackson covered him with his gun, saying: Dont do that , Jack ! Hold up your hands !
Sparks drew his revolver and aimed it at which moment Jackson fired , the shot taking effect in the chest . Apparently untouched, Sparks aimed and fired . At the same moment Jackson fired a second shot which entered Sparks head, and he fell dead. Captain Jackson is well known in mining circles throughout the state, especially Pueblo, the headquarters of the company which he manages . Public sympathy is entirely on his side. Captain Jackson came into Mancos on Saturday night and gave himself up to the deputy sheriff ."

An 1898 Report from the Colorado Mining Index states: "Clear Creek Co.-- Golconda Mining and Tunneling Co. uses air drills in both tunnels, the Golconda and the one opposite the Mahala. The Golconda is making good headway and will reach several of the lodes soon, but the big lode will not be reached for almost 1,000 ft. Shafter Mining Co. is now sinking below the 600-ft. level, where 6 ft. of good ore is being hauled to Mixsell Mill for treatment."

One of the most impressive sites yet in Colorado. The collapsed portal appears to be the original entrance from 1897-8. There is a larger portal that is securely gated preventing unauthorized entry. The mine is wet in some sections but solid rock and stable. 4 Gas meters found no abnormal readings nor alarms. Native gold is the primary export from this mine. These deposits are assumed to be very rich as there is visible gold to be found in the waste dump below the boarding house. Recommend re-processing all of the existing waste rock. Excellent spot for a small mining operation to work at a high profit from high grading the underground deposits. Mine is well documented and only closed due to logistic costs in 1983-4 when gold was under $400 per ounce. With gold values at triple that today this seems a very viable option for full development.

Access to the Mine: Walk in through gate
Tailings Present: over 50k tons
Entrance: Adit, open
Mine Cut: Hard Rock
Depth / Length : Documented at 7000' in 1947
Minerals in the Mine: Gold, Silver
Foot Traffic in the Mine: None
Last Worked: 1982