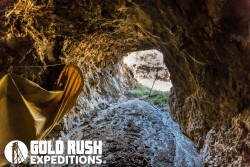 Wallapai District – Mohave County, Arizona
You can drive directly to each mine entrance.
High clearance 4WD required to access the claim.
Contact us for exact coordinates

The St. Louis is a large and significant mining property that has produced good quality gold and silver. The claim contains a series of adits and shafts working up the side of the mountain. All of the mines are open and have not been damaged by reclamation. The lowest portal, known as the Jewelry Store drift shows some quality gold and silver deposits. It has filled a bit with run off and would need to be dug out to be safely worked commercially. It has been bolted in the spine and is stable and competent.

Above the Jewelry store drift is another series of adits cut up the mountain. These cuts are all on the same general trend. There is a shaft near the middle camp and one at the top of the hill providing access to the apex of the vein. The mines show native gold and some native silver. There is substantial lead and silver content in sulfides as well. Sulfides are notoriously difficult to process. The primary mineral value should be noted as the native silver and gold. There is also copper found throughout the workings in dark nodules and veins.

There is excellent historical documentation of this claim site available. This due to a report from the Arizona State Engineer in 1981. The report details the gold and native silver values and reports that there are substantial reserves Just outside of Cerbat Arizona. Mine is cut on multiple levels all the way up the side of the mountain working the same vein of gold and silver. The area is remote and does not appear to get much traffic. Roads are passable but deeply rutted and will require high clearance 4WD. Large operation at one point in time. Appears to last have been worked in the 1980’s. entrance to the lowest adit has been shored up nicely.

The rocks exposed at the surface comprise pre-Cambrian crystalline rocks chiefly of granitic composition, cut by large intrusions of Mesozoic (?) granite (the Ithaca Peak granite), especially one mass near the center of the area, and pre-Cambrian granite (Chloride granite) in the northern part of the area. Dikes of many rock types, probably related genetically to the Mesozoic (?) granite, are scattered throughout the area. Some are aligned parallel to the prominent northwestward-trending system of fractures and veins, but others trend in different directions. Remnants of volcanic rocks of probable Tertiary and Quaternary age are found around the margins of the Cerbat Mountains but are not present in the mapped area.

The ore deposits are conveniently separated into three types. The first is represented by the vein deposits of the district, the second by a quartz-sulfide stockwork deposit, and the third by the Emerald Isle copper deposit. The vein deposits are overwhelmingly the most important in the district. The quartz-sulfide stockwork deposit contains some low-grade copper and molybdenum. The Emerald Isle copper deposit is quite different from all other deposits in the district and consists of a fissure vein and mineralized area of chrysocolla chiefly confined to alluvium.[1]

The St. Louis Mine was discovered about 1865 according to F.C. Schrader. During his inspection of the mine, in 1905, mining operations were under the St. Louis Consolidated Mining and Milling Company of Los Angeles, California (owners).

F. C. Schrader, inU. S. Geological Survey Bulletin No. 397, says in part as follows:
"The ore deposits of this district contain principally gold, silver and lead. They occur in fissure veins, which in general have a northwesterly trend and a steep northeasterly or southwesterly dip. Those situated north of Cerbat Wash are chiefly gold bearing; those to the south contain principally silver and lead. The gangue 1s mainly quartz and the values usually favor the hanging wall. The principal minerals are pyrite, chalcopyrite, galena, zinc blende, stibnite and native gold.

Mining work was on a moderate scale, during intermittent periods. Development was principally by drift adits and shafts within a vertical range of about 400 ft. below the surface. Five separate veins were exploited within the upper levels. No mining or exploration was done below the strong ore exposure within the "Jewelry Store" drift near the base of the mountain, at the access road level, about 4150 ft. in elevation.

Records of past operations and production from the mine are incomplete, but production records compiled by the u.S. Bureau of Mines from 1901 through 1948 are listed in U.S.G.S.

During 1942 the property was examined by an Arizona State engineer in company with Mr. A.T. Leitzow (the last mine owner and operator, prior to the present owners). About 400 tons of ore had been produced by this operator prior to that time.

The mine property consists of ten un-patented claims named: St. Louis and St. Louis Nos. 2 through 10, inclusive; which were purchased from the estate of A.T. Leitzow lD 1981.

No work has been done since about 1948 by former owner A.T. Leitzow. Acquisition of the property by the new owners, and recent litigation, has impeded any recent mining activity.

A report dated July 31, 1980, by this author describes the most promising "Jewelry Store" deposit; which supplements reserves from previously mined veins considered in this report. [1]

A very substantial working. The mines are cut all the way up the side of the hill. Workings are cut on a gold and silver vein of ore. There are some workings done but a lot of work is left undone and there is a lot of ore waiting for transport for processing. Estimate 1500-2000' of workings combined in the hills.

Access to the Mine: You can drive directly to each mine entrance.
Tailings Present: 50,000 + tons. Quartz, sulfide silver, iron.
Entrance: Solid Rock
Mine Cut: Adits and shafts
Depth / Length: 1800'+
Minerals in the Mine: Historically mined for gold and silver. Lots of veins inside the adits on the same trend seen.
Foot Traffic in the Mine: None
Last Worked: 1950s