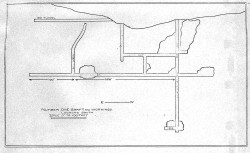 Sylvania District – Esmeralda County, Nevada
You can drive directly to the mine entrances on the claims.
Easy 2WD dirt road to claims.
Contact us for exact coordinates.

According to documentation, the Sylvania Mine Property covers the Bullion, 4 Aces and Sylvania Mines. There is a total of 80 acres of which encompass all of the workings pertinent to the mining activity. The claims also cover all old mining outbuildings, workshops and miners quarters.

Some less informed individuals have referred to the camp as a "Ghost Town" called Sylvania, this is incorrect. There was never any town of Sylvania, only the mine camp which was quite expansive as can be seen in the image galleries.

The mines were last working in 1974-76 according to historical documentation. This matches closely with surveyors observations that dated last workings to the early 1980s.

The adit portals were gated and the primary (No. 1) shaft was secured in 2008. There has been no sampling or other work executed on the claims since 1976 when the last operation closed up.

The primary output is reported as silver and lead with minimal gold according to documentation. Our surveyors disputed this reporting based on a massive gold shaker and a trommel located on the claim. These are not used for silver or lead separation, only for gold.

This assertion is further validated by the Clair family who held the claims up into the early 1990s. The family reportedly made a good living off the property from 1947 until 1970 when the mine was leased to an outside operation. They were outwardly hostile to outsiders and mining companies who made numerous offers to purchase the property. Locals report that the mine was turning out primarily gold which was sold in Tonopah and San Francisco by the family. Obscuring this information assisted in bypassing taxes and other assessments and is quite a common practice.

There are multiple houses and sheds in fairly good repair. These homes once had working indoor plumbing, full bathrooms, and kitchens. There are currently two (2) gated adits, one (1) open shaft, one (1) secured shaft and multiple trench and prospect cuts on the claims.

Very remote area near the Nevada/California border. This claim is recommended for small miners with limited capital looking to build up a new venture. There is substantial ore and deposits visible in the existing workings. A small bond along with a Notice of Operation would allow for excavation of the secured shafts and further workings and samplings to define ore bodies and actual reserves. Once this preliminary work has been completed the mine could be optioned to a larger company or simply expanded by the owner. High potential for high profit with minimal investments.

There are a substantial number of professional reports dating back to 1910 discussing the Sylvania and the 4 Aces Mine (located on the Sylvania Extension). The two mines were eventually combined under the same family company. Reports are always very favorable of operating the mine. Noting Gold, Silver and Lead values. The mine averaged $47.11 per ton in 1912, that figure, using 2017 values would be roughly $1130.00 per ton in gold and silver values with lead disregarded. Assays were performed at various points within the mines and the historical documentation is as follows:

Sylvania was discovered in the early 1870s and was worked principally by Mexicans, who built two of their native adobe smelters until in 1909 it was bought by the Clair family. The father of the present owner, Don Clair, operated the mine for a number of years and then passed it on to his sons who have made a good living from mining for a number of years. The Clairs have usually been difficult to deal with, and possibly for this reason no big mining company has ever optioned the ground; although this writer knows several companies that have tried to deal for it.[1]

The claims cover all of the workings of the 4 Aces, old Sylvania and other associated workings. A massive camp and mill with many buildings and other remnants showing the mine was producing a large amount of money at one time. The mines are secured and have likely not been addressed since the early 1980s.

Machinery on the claim would indicate gold production only. All of the associated implements on the claim indicate gold production as well. Geology and underground veins show some silver and small veins with gold . Estimated over 2500' workings. Likely the old Sylvania, 4 aces and the other mines are interconnected at various levels. This is not clearly known at this time.