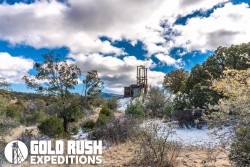 This claim is a turn key operation and ready for work and sampling. It has the potential for commercial operation on a small to medium scale. two mills have existed on the site, one gravity mill with a single battery stamp, and later into 1950s a leaching process plant.

The mine is accessed via a large double compartment shaft that has been maintained or recently rehabilitated. There are existing cable systems which can be utilized by the existing headframe with integrated ore bin. There is plumbing and likely a pump below that is powered by the new electrical lines and cabling that run into the mine. A recently constructed storage shed with an electrical breaker box, sits adjacent to the shaft.

The claim includes the remnants of two milling operations. There is a mill directly underneath the mine that appears to have contained a crusher and separation vats. Another, later mill looks like it may have been a cyanide leaching operation.

The presence of two mills on the claim indicate a large recovery and underground operation to justify the building of a full mill and processing center. The surveyors were not able to locate any high grade ores below the mill. The overall condition of the mine, which has been well maintained, and the existing infrastructure in the mine (that has been maintained) infer that there are likely substantial reserves underground.

Local mining operations have reported ore pockets are very rich, with one report stating that 400 lbs were extracted, with a valuation of $80,000.00 per ton (1964 values).

Surveyors assess the site was worked for gold as there is a lot of iron and quartz that has been crushed and discarded just below the ore bin. Mine appears to be in excellent condition. Would be ideal for a small group of miners.

There is nothing to be worked above ground. All work would need to take place in the ore bodies below ground. We would not recommend for miners that do not have training or experience working underground. We would expect a higher rate of return due to the built up infrastructure that was created from the initial returns of the mine.

The Burro Mountains and the adjacent region to the south and west are subdivided into five geologic provinces by two, and probably three, major northwest-trending faults: the Mangas, the Malone, and a fault 2 miles northeast of the Malone fault. (See fig. 30.) Northeast of the Mangas fault the Little Burro Mountains consist of a complex of pre-Cambrian granite, late Cretaceous or early Tertiary monzonitic intrusions, Tertiary volcanic rocks, and Cretaceous sedimentary rocks (Paige, 1916). Southwest of the Mangas fault is the Mangas Valley, which consists of Gila conglomerate of Pliocene and Pleistocene age and more recent sands and gravels. Southwest of the Mangas Valley pre-Cambrian granite constitutes most of the Big Burro Mountains, but it is intruded by the quartz monzonite Tyrone stock and" by dikes of diverse composition. On the southwest side Of the Big Burro Mountains a graben valley occurs between the Malone fault and the fault 2 miles to the northeast. This graben contains Tertiary volcanic rocks overlain by Gila conglomerate, both units dipping steeply northeast. Southwest of the Malone fault pre-Cambrian granite and included schists and quartzites are present. Quaternary sands and gravels and possibly Gila conglomerate occupy the basins south and southeast of the Burro Mountains.[1]