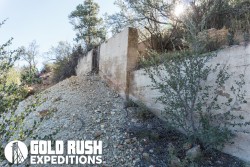 The Telluride Chief Mine is a Gold mine with silver and Molybdenum deposits associated. The mine is sunk in the intersection of the Prince George and Banner lodes which have been noted for substantial gold values. The ore streaks are said to be 3-4’ wide at any given section and up to 1000’ long. The lodes do continue off the claim but the gold content is said to diminish as the vein extends with silver and zinc values increasing as the veins stretch out. The Telluride Chief is the high point, or Apex of these veins in addition to the point where they intersect giving the claim owner full control of the deposits.

The mine was never actually worked for Gold. It was active from 1917 to 1919 for molybdenum which provide required resources for WWI. Gold values were said to be $43 per ton. (Gold @ $20 per oz.)
There is a very extensive reporting that was done on the Telluride Chief in 1919 and 1937, there has not been any development work done at the mine since this time. It was held by a private mining company through the 1960s, then sold to another mining company (Anaconda?) in the early 1970s. Private assay reports stated the ores at depth averaged 2.1 oz/T in AU and 1.1 in AG with minimal molybdenum and zinc. The mine has been utilized by ranchers locally for water and there are water tanks, a pump that reaches into the depths of the mine to pump water and electrical power run to the site.

The mine was advertised for sale in 1939 for $65,000.00 with a 3% return on smelter, however it is unclear if the mine ever operated past 1919. Some historic photos show the site and work being done circa 1929 but there are no reports of production. The work done from 1900-1919 proved up the ores as roughly 2 ounces of gold to the ton with some silver, consistently.

The mine is thought to have considerable reserves but those have not been mapped. A core drilling program reported some values from the surface sampling. Underground mapping is present but there is no accounting for the gold values which are hand written on the underground works and state over 2 oz/T (assumed gold).

Mining Engineer CC Randall of the Walapai Mountain Mining Company stated that the vein was approximately 1500’ in length and averaged 3.13’ in width. The values (in gold) range from a trace to as high as $154 (7.7 oz/Ton), the general average over 540’ of length being $12 (.6 oz/Ton).
There is also a large mill on the property, apparent gravity type mill. Historically it is defined as follows :
A mill was erected at property by Standard Minerals Company of Anaheim, California, having capacity of 100 tons daily, to recover molybdenite from the ore by flotation. Plant was of poor design and did not get good results. However, this plant milled considerable molybdenite ore found in country rock removed from veins; hut no attempt was made to work the veins in order to recover other values mentioned. Mill operated from June 1916 to Nov. 1918.

The property, as a whole is generally undeveloped despite considerable documentation. It is assumed that some work was carried out on the property from 1919 to 1960, the mine was not closed as a part of the War Act due to the presence of strategic minerals of Molybdenum and Tungsten.

In the early 2000s, the Arizona Bureau of Land Management forced the then owner of the property to gate and block the main shaft which had apparently anthilled into an unsafe opening. It is assumed this was a foam plug with fill dirt placed over as is common practice for the state and the area.

There is access into the workings on the 200 from a series of drifts that are accessible from near the mill site. There was no water noted inside the workings at the time of surveys in 2016 or 2017. The north tunnel, as it is historically known, is short and shows no significant deposits.

There is a glowing report of the mine from a mining engineer in 1918 detailing exactly how to develop the mine for gold production. Unfortunately, this plan required the expenditure of roughly $75,000 ($1.14 Million dollars in 2018 adjusted for inflation).

The mine has obvious value but will require some capital investment to be developed. A small JV operation was seeking to raise funds to purchase and develop the mine in 2017 but has not yet taken actions to acquire ownership of the site.

The mines were originally worked for Molybdenum, in later years (1928-1940) they have been worked exclusively for native gold deposits. Substantial reserves have been inferred but not mapped or defined. Veins are an average of 3' wide and run at least 1500'. Contact Jason with any questions or for more information regarding the mineral property